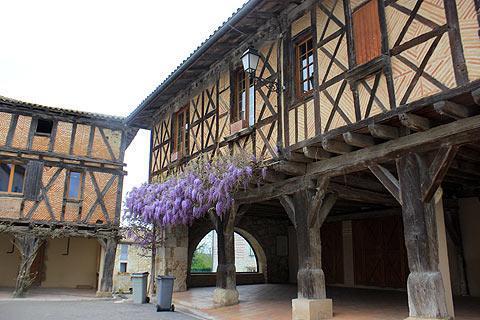 Dunes is a village in the Tarn-et-Garonne department on the border with Gers. It is close to the "most beautiful village" of Auvillar and itself has a very attractive medieval centre.

Dunes is a 13th century Bastide village whose streets radiate out in a grid pattern from its main square. Like many bastides the main square is surrounded by attractive arcaded buildings but in Dunes the variety is particularly interesting. 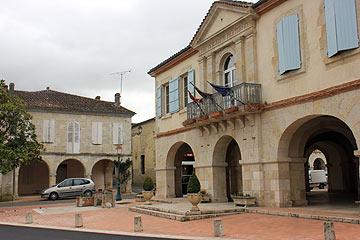 Some are stone building and some half-timbered. Some of the arches of the arcades are wide and low and some tall and slim. The beautiful half timbered house (see photo above) on one corner belonged to the Lords of Dunes who were linked to the royal family in the late 16th century.

Not only are the buildings around the edges of the square very pretty but the mairie which sits in the centre of the village is also an attractive arcaded building.

Having looked round the centre of Dunes I am amazed it does not feature more prominently on the local tourist agenda but rather seems to be a well kept secret.

Sadly as well as the interesting history of the Lords and Ladies of Balzac, Dunes has a much sadder more recent history.

During the second world war an SS unit came to neighbouring Valence d'Agen in search of members of the resistance and a group were denounced to the nazis, probably by two women of the neighbouring village.

The SS unit set up tables under the balcony of the post office building, assembled 70 men in the square and hung 12 of them one by one. The main square is now named the Place des Martyrs to remember this tragic event.

Close to the main square is the 16th century church which inside houses some lovely 17th century woodwork around the altar.

The Lords and Ladies of Dunes - a little history

In 1574 Charles of Balzac was the lover of Queen Margaut, wife of Henry IV. In 1589 it is said that he participated in the assassination of Henry III.

In 1589 his niece, Henriette of Balzac became the favourite of Henri IV of France. After much hard negotiating with her parents he made her Marquise of Verneuil and promised to marry her if she bore him a son within a year.  She quickly fell pregnant but unfortunately when lightening hit her bedroom and caused her to abort. She gave birth to a stillborn son and the king married Marie de Medicis instead.

She continued to be his lover and fell pregnant at about the same time as Marie de Medicis and the court laid bets on who would be first to bear the king a son. Both did but Marie's son was born two months earlier. Despite this Henriette remained the king's favourite and was encouraged to humiliate the queen. She went on to bear the king two more children.

Initially her children were brought up and educated with the queen's own children much to her disgust but when Henriette's father plotted to kill Louis, the legitimate heir to King Henri, he was condemned to death though saved from the death sentence by his daughter. She lost the kings trust for good though continued to be his mistress. Their relationship became very volatile and the king took various other lovers. When he was assassinated 10 years later Henriette was one of the suspects.

The surrounding countryside is pretty and whilst touring you could stop at the pretty villages of Bardigues and Le-Pin and the town of Valence d'Agen.

The "most beautiful village" of Auvillar is close by as are the famous cloisters of Moissac.

Map of Dunes and places nearby

Visit near Dunes with France This Way reviews

Plan your visit to Dunes, Tarn-et-Garonne

The French version of this page is at Dunes (Francais)