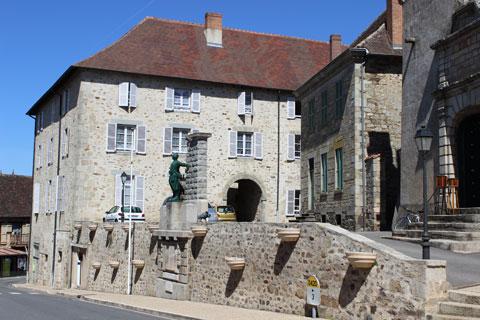 The small village of Pierre-Buffière is situated in the Haute-Vienne department of Limousin and about 20 kilometres south-east of Limoges.

The village is also close to the A20 autoroute between Paris and south-west France, and it is as you travel south along the motorway that you will probably get your first view of the village.

Unfortunately at 130 kilometres an hour you just have time to notice the village before it disappears from view. Fortunately the turning for Pierre-Buffiere is after you have seen a glimpse of the village and you can turn off and explore!

It is because of this position, and the interesting historical centre of Pierre-Buffière, that it is now listed as a Village Etape: these are villages close to main routes that are ideal places to visit if you want half an hour out of the car.

Although it doesn't take long to explore, the centre of the village is pretty and deserves a stroll, and where you can park and find basic facilities. There is a square in the centre (the Place de la Republique) that includes the two principal monuments in Pierre-Buffiere:

- the 11th century Church of Sainte-Croix, with significant alterations made in the 15th and 18th centuries. One unusual feature is the main entrance which has 18 ceramic tiles painted with pictures of the apostles and added to the church in 1838.

- the half-timbered manor house in the Place de la Republique which was a 16th century staging post and is now called the Hotel des Anges.

You can follow the steep streets below the square to explore the traditional village of Pierre-Buffiere or take the road to the south-east (towards the autoroute) to find the tourist office and more small shops and banks. As well as useful local information the Tourist Office has free wifi (but is closed Sundays, bank holidays and lunchtimes).

There is a picnic area in a small park near the town centre, but we suggest you drive a little further, down beyond the village and into the valley of the Briance river. This is only another kilometre or two and you are in a lovely valley by the river where you will also find a picnic area, and picturesque views of the village, which is now on a ridge high above you.

The arched stone bridge acros the river here dates from the 12th century and is called the Pont de l'Ermittage, and you can also see the two viaducts from below, one of which is the autoroute.

A short distance to the south of Pierre-Buffiere you will reach other villages d'etape at Magnac-Bourg, Donzenac and Uzerche. Donzenac has a lovely historic centre, and Uzerche is a beautiful small town on the Vézere River with lovely views and an extensive historic centre. (Nothing against Magnac-Bourg, we just haven't had a chance to visit yet!)

Map of Pierre-Buffiere and places nearby

Visit near Pierre-Buffiere with France This Way reviews

Plan your visit to Pierre-Buffiere, Haute-Vienne

The French version of this page is at Pierre-Buffiere (Francais)