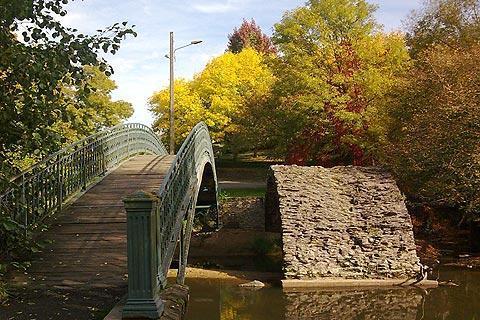 Aixe-sur-Vienne is a small town situated a few kilometres west of Limoges in the Haute-Vienne department of Limousin. Not surprisingly given its name, the town stands on the upper reaches of the Vienne River and is also on one of the (less used) pilgrimage paths that lead through France.

Despite lacking major monuments and being rather outside the more popular tourist areas of southern France Aixe-sur-Vienne is one of those towns that grows on you as you explore in a quiet and unassuming way that is hard to describe, and worth visiting when you are in the region.

The most important historic part of the town centre is along Rue Rochefroide and in Place Saint Georges where several medieval houses can be seen. Another notable house is the Maison Rougerie in the Place des Horteils.

The remains of a castle in Rue Jeanne d'Albret and a couple of churches and chapels will also catch your attention. Most important among these is the Church of Sainte-Croix, a 13th century church that combines elements from both the gothic and roman architectural styles (as well as significant modifications to the structure that were made during the 19th century), with its gothic style entrance and containing various relics and a shrine.

It is said that the Church of Sainte-Croix was built in thius location after a pilgrim carrying a thorn from the true cross chose the site as a resting place.

While here in Aixe-sur-Vienne you can also see the small 14th century Mallassert bridge, often called the Pont Romain, The bridge is unusual in that it doesn't quite reach to the other side! Apparently the original bridge would have had two of these small arches, and planks of wood resting on top to walk on.

You can also walk along the banks of the Vienne river.

Market day in Aixe-sur-Vienne is Friday, and this is the best day to visit the town.

A little way downstream from Aixe-sur-Vienne you can see the Chateau de Losmonerie, a 16th century manor house currently being renovated and open to visits during August only, while at Bosmie l'Aiguille you can see the chateau and surrounding parkland of the Chateau du Boucheron, now used as the village mairie and built in a distinctive style of red brick with two tall spires.

Map of Aixe-sur-Vienne and places nearby

Visit near Aixe-sur-Vienne with France This Way reviews

Plan your visit to Aixe-sur-Vienne, Haute-Vienne