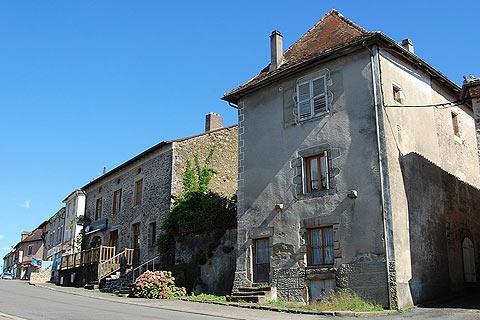 The quiet small town of Chalus is in the south-west of the Haute-Vienne department of Limousin and close to the border with Aquitaine. It has an unspoiled traditional town centre and the remains of two medieval castles, among other places of interest and is part of the 'Monts du Châlus' region.

The village passed into the history books in 1199 when Richard the Lionheart was fatally wounded in a battle here during the Second Siege of Chalus Chabrol.

The town centre of Chalus itself is quiet, and a typical example of the traditional towns in the region with a central market place and several narrow alleys to explore. The Upper Town is the oldest part of Chalus, while the more recent part is in the valley along the River Tardoire. The oldest part of the lower town is in the area around the Maulmont Fortress, and many of the houses were originally built within the grounds of this castle.

You will see various houses and other sights of interest as you explore, such as the sturdy stone houses around the Place du Marché and the medieval houses at the north-west end of Rue Salardine.

The ruined castle that stands above the town is the 11th century Chateau of Chalus-Chabrol, where Richard the Lionheart was fatally wounded in 1199. Further down in the town you can see the remains of the Chateau of Chalus-Maulmont, built around 1280.

History enthusiasts will also want to see the ancient hill fort structures at nearby Mazaubrun.

The principal church in Chalus is the Church of Notre-Dame of the Assumption, which contains some notable statues and stained glass windows. A more ancient church, with origins dating from the 11th century although largely rebuilt in the 15th century, can be seen at nearby Lageyrat and where you can see some very old tombstones in the graveyard.

Another notable characteristic of Chalus is the large number of ponds and small lakes, wells and wash-houses. While many of these have historic origins, a good number are more recent, and constructed as part of the local efforts to encourage tourism.

We suggest you allow time to follow one of the many walking trails in the local countryside since these are the ideal way to appreciate the natural beauty of the region, and also several of the ancient water sources and fountains are to be found in the countryside rather than in the town centre.

The Monts de Chalus tourist office (in Chalus itself) has lots of ides to get you started, according to whether you are adventurous, walking with children, interested in history etc

Other attractions in the Monts de Chalus and nearby

It won't take you long to stroll around Châlus itself, perhaps an hour or so plus time for a coffee. The principal appeal of a visit is the chance to enjoy the gently rolling landscapes of the surrounding countryside, and the historic sites both here and elsewhere in the Monts de Chalus rather than any one particular town or village.

The group of villages that together comprise the Monts de Chalus region includes Chalus itself and also Bussière-Galant, Dournazac, Flavignac, Lavignac, Les Cars and Pageas. You can see other medieval castles at Dournazac (the impressive Chateau de Montbrun in a picturesque waterside setting) and Les Cars. These two castles, together with the two in Chalus itself, together make up the local 'Route des Chateaux'.

You can see one of the most picturesque lakes in the region at Flavignac, and each of these small villages has its own small monuments and places of interest such as a traditional church or unspoiled high street as well as various leisure activities.

Chalus is also part of the Perigord-Limousin Regional Natural Park with its many places of interest and scenic highlights.

Map of Chalus and places nearby

Visit near Chalus with France This Way reviews

Plan your visit to Chalus, Haute-Vienne

Regular market(s) are held in Chalus each Friday. (Markets are held in the morning unless stated.)

The French version of this page is at Chalus (Francais)