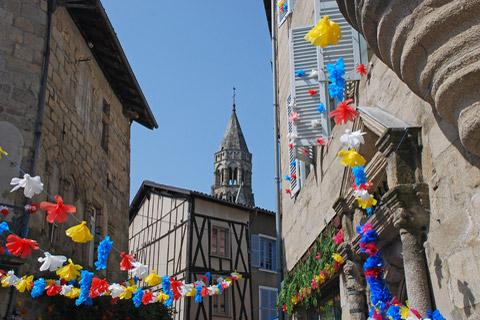 Saint-Leonard-de-Noblat is a small town to the east of Limoges, in the Haute-Vienne department of Limousin (central France). The town originally developed as an important medieval pilgrimage centre, with the pilgrims attracted by the tomb of Saint-Leonard, and even today the town is situated on an important pilgrimage route. 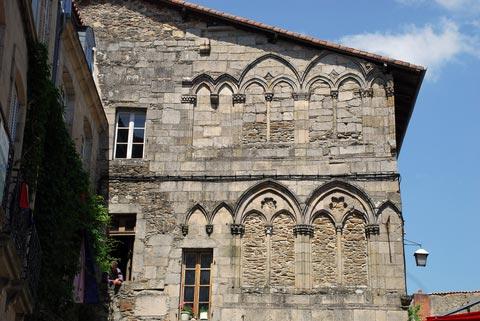 The historical centre is broadly defined by the boulevards that surround the town - these have replaced the defensive walls and moats that originally defended the town.

The collegiale itself dates from the 11th century. Built originally in the roman style it had later gothic modifications. As one of the destinations on the pilgrimage route from Vezelay to Santiago de Compostelle (in Spain) it is also officially listed as a UNESCO world heritage site.

Particular highlights include the belltower (note how the belltower changes from a square design at the bottom to an octagonal shape towards the top) and porch and the tomb of Saint-Leonard.

Single women might like to touch the lock on Saint-Leonards chain above the tomb - apparently you will soon be blessed with a husband and children if you do touch it!

Elsewhere in the town

The streets around the collegiale in SaintLeonard-de-Noblat are worth exploring. Many of the houses in this part of the town are half-timbered while others are grander houses made from stone, and many have interesting little features to discover. The original town hall is just next to the cathedral and you can see some decorative stonework in the facade.

There are also various buildings that originally formed part of the collegiale complex, such as the Convent of Filles Notre-Dame and the entrance to the Pilgrim Hospital on the junction of Boulevard Carnot and Rue Georges Perin.

On the Place de la Republique you can see the two houses with towers. One of the towers is square, the other round, and both these houses were built in the 17th century. 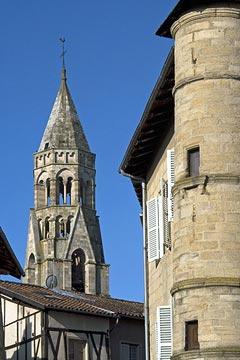 After exploring the town centre take an amble along the river Vienne to see some more attractive houses and scenery, and a bridge dating from the 13th century (and two newer bridges).

There are also a couple of small museums in Saint-Leonard-de-Noblat. One of them is dedicated to Gay-Lussac, the renowned 18th century chemist. If you studied chemistry at school you will perhaps remember the name Gay-Lussac: he developed a famous chemistry law that explained the volumes of gases when they are combined. I'll spare you the details here, but if you'd like a refresher course the museum is in the Convent of Filles Notre-Dame.

At the Moulin du Got you can learn about the history of paper making techniques and also the historical importance of this industry to the region. The museum is in a paper mill that was in production from the 15th century to the 1950's and has more recently been restored as museum.

Map of Saint-Leonard-de-Noblat and places nearby

Visit near Saint-Leonard-de-Noblat with France This Way reviews

Plan your visit to Saint-Leonard-de-Noblat, Haute-Vienne