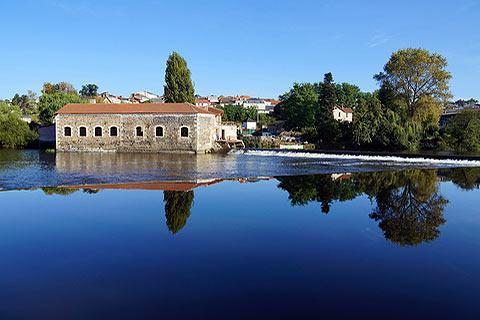 If you are looking for somewhere off the beaten track yet with its own particular beauty - rolling wooded landscapes interspersed with streams and rivers and numerous lakes - the Haute-Vienne department could be just the destination for you. One to discover - slowly!

Haute-Vienne is the north-western department of the Limousin region of southern-central France, with the Centre (Loire Valley) region to the north, Poitou-Charentes to the west and the Dordogne to the south. As you might guess from the name the River Vienne crosses the department.

While many visitors are first attracted to the Haute-Vienne by the quiet unspoiled countryside, which includes parts of two Regional Natural Parks (Perigord-Limousin and Millevaches) there are also a good number of interesting villages and towns, museums and historic monuments, to add variety to your visit.

Many visits will include a trip to the famous medieval porcelain town of Limoges, which has several sites and attractions of interest. To the east of Limoges you should also visit the attractive village of Saint-Leonard-de-Noblat.

South-west of Limoges the town of Chalus is interesting because of its castles, and for being the place where Richard the Lionheart was fatally injured, and the village of Solignac also has several interesting sights.

A little way south of Solignac find time to take a stroll around the villages of Saint-Jean-Ligoure and Pierre-Buffiere.

The most imposing castle in Haute-Vienne can also be seen here: the Chateau de Montbrun is found at Dournazac and is an imposing medieval castle (12th century) with substantial defences and towers.

To the west of here be sure to pay tribute at the village of Oradour-sur Glane, a village that was destroyed during the final months of World War II by the German army, and has been maintained in the same condition - with bombed buildings and burned out cars for example - in a poignant tribute.

Continuing west you pass the town of Aixe-sur-Vienne and reach the Regional Natural Parc of Perigord-Limousin, a change that is also seen in the landscape as it becomes more similar to those found in the northern Dordogne.

You can also see the castle (and a famous meteorite site) at Rochechouart in this part of the Haute-Vienne department, and close to the town of Saint-Junien, one of the gateway towns to the Perigord-Limousin Natural Regional Park.

The village at Saint-Auvent is a litle way south-east from here and features a castle with medieval origins and an interesting church.

To the far south of the Haute-Vienne department the town of Saint-Yrieix-la-Perche also has several sights of interest, and the small village nearby at Le Chalard also deserves a visit, as does Chateau-Chervix, dominated by its medieval castle tower.

One of the largest artificial lakes in France - the Vassiviere Lake - is situated on the eastern border of the department in a picturesque location surrounded by forested hills, and is also a popular leisure lake, especially during summer months.

We also suggest you take a stroll around the Vienne river at Eymoutiers when passing through this part of the department.

The character of the department changes again as you travel towards the north as the edges of the Massif Central starting to take shape in the form of the Monts d'Ambazac and the Monts de Blond, and the fine views that they offer.

Highlights in this part of the department include the historic town of Le Dorat, where you will find the famous Collégiale Saint-Pierre dating from the 11th century and, town of Bellac and the region around Verneuil-Moustiers.

East of Bellac the small villages of Chateauponsac and Balledent both have a great deal of character and are a recommended detour, as are the town and church at Magnac-Laval and the village at Rancon.

The large leisure lake of Saint Pardoux offers various activities including beaches, fishing and various boating activities, and the village at Razes also merits an exploration above all for the roman style church.

To the north-west you can visit the pretty village of Mortemart - the only village in the Haute-Vienne to be officially classed as one of the 'most beautiful villages of France' and on the edges of the Monts de Blond natural region.

The small village of Montrol-Senard close to Mortemart also has lovely views across the region and the whole village has been turned into a sort of ecomuseum reflecting life in a typical Limousin village a century ago.

The choice of outdoor activities in Haute-Vienne is very extensive. Among the most popular are activities based around water including the two lakes mentioned above and the Vienne river, and also many other smaller lakes and rivers, which together provide numerous possibilities for swimming and paddling, sunbathing on river beaches, waterskiing, sailing and canoeing, and also fishing.

Other popular outdoor activities include walking, cycling (road and off-road) and horse-riding. The possibilities are far too extensive to list here so ask for local information at the nearest Tourist Office when you visit because there is certain to be access to these sports close to hand.

Map of Haute-Vienne and places nearby