Solre-le-Chateau is a small town in the rolling countryside to the east of the Nord department of northern France and just a few kilometres from the French border with Belgium.

France This Way comment: although Solre-le-Chateau is not a major destination, it is a pleasant town to visit if you are in the region, and interesting to see the church with its unusual spire.

You can start your visit in the main square in Solre-le-Chateau, where you can see the church of Saint-Peter and the town hall, the two principal monuments in the town. 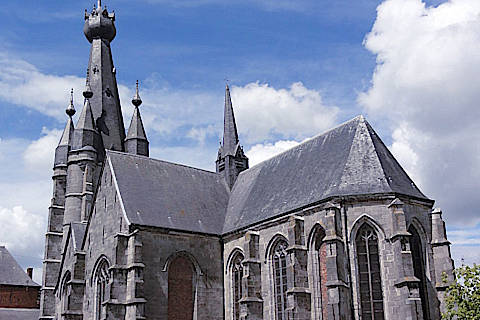 The church spire is its most unusual feature. From almost everywhere in the town - and from many places in the surrounding countryside - you can see the church spire with its bulb-shaped top (bulbiforme). As you get closer to the church you will see that the whole spire leans towards the square. The church was built in the 16th century, but the spire was rebuilt in the early 17th century after a fire destroyed the original.

The bulb shaped object is not decorative: it provided a lookout post at a time that the town was at risk of invasion from the east. The slope of the spire is probably due to a fault in the wood used at the time the spire was constructed, or subsequent deterioration. Accordng to the experts the slope of the spire is not changing and it is not going to fall over!

There is also a theory with this church, as with other churches in France that have sloping spires, that the leaning spire is a design feature, perhaps to permit it to better cope with prevailing weather conditions..

Next to the church, the town hall of Solre-le-Chateau is an attractive building which includes renaissance style elements. It is an attractive red-brick building wth rows of arched windows and a small clocktower among its features.

Although the town hall dates from the 16th century, at this time it was quite a different building with two stories, a covered market at ground level and an external staircase and belfry. In the 19th century the staircase and belfry were lost, an additional storey was added, and the market transformed into offices for the mairie.

The castle that gave Solre-le-Chateau its name was also once on this main square, but after a turbulent history it was destroyed in the 18th century after the revolution.

Although these are the main buildings of importance in Solre-le-Chateau, there are other nice buildings around the square including the "new castle" in red and white brick at the far corner of the square, and others in the narrow streets around the main square and along Grand Rue, and two small chapels. 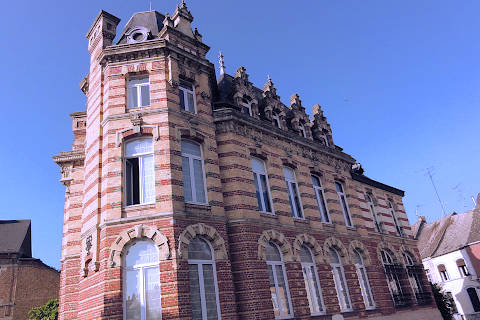 A short distance south of the town on the road towards Epine you can see two large rocks which are the remaining parts of a prehistoric menhir, called the Pierres Martines. Not particulaly exciting to see if truth be told, but worth a look if you are passing...

Other places of interest in the area around Solre-le-Chateau include Maroilles and Le Quesnoy, both to the west of here.

Map of Solre-le-Chateau and places nearby

Visit near Solre-le-Chateau with France This Way reviews

Plan your visit to Solre-le-Chateau, Nord