There are several popular highlights in Nord-Pas-de-Calais, including the resorts such as Le Touquet and the city of Lille, and a great deal of countryside to enjoy - so come and explore!

The Nord-Pas-de-Calais region is situated at the northernmost part of France, with the border with Belgium to the north and the coastal towns of Calais (with the Channel Tunnel) and Boulogne to the west. There are two departments in the region: Nord and Pas-de-Calais.

While the region is not the most visited by tourists in France, there are a good number of interesting towns, resorts and sights. Even if you are not planning to pass your whole visit to France here in the north we suggest you allow a couple of days to explore at the start or end of your trip.

Much of the most northern part of the region between Calais and Boulogne is now part of the Regional Natural Park des Caps et Marais d'Opale, which includes the so-called Opal Coast.

Note: Cap-Blanc-Nez and Cap-Gris-Nez on the coast here are listed among just 30 official 'Grand Sites of France'

Several seaside resorts are to be found in the Calais region, including Le Touquet and Boulogne-sur-Mer. These resorts are equally popular with Parisians, shoppers on a day trip to France from the UK, and holidaymakers from the UK.

The Nausicaa Centre at Boulogne is one of the largest and most impressive aquariums and sea-centres in Europe and a highlight of your visit. 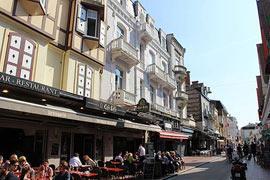 Other seaside resorts on this stretch of coast include Berck-Plage, the fortified town at Gravelines, Hardelot, Wimereux and Wissant.

Some of the beaches of the region, especially those south of Boulogne, are particularly attractive and popular (while at Boulogne you can visit the national monument dedicated to Napoleon, at the Column of the Grand Army).

While on the coast don't forget to visit the Cap Gris-Nez and the Cap Blanc-Nez to admire the impressive coastal cliff scenery.

There is another important reason why visitors are attracted to the Nord-Pas-de-Calais, which is the battlefields and cemeteries of the WWI battles (and also the sites of earlier medieval battlefields).

Between Amiens and Lille are the Somme battlefields, where ferocious trench battles that were fought at such enormous cost in human life from 1916-1918, are still a major pilgrimage destination. Some of the trenches of the Somme have been kept intact to help visitors better understand the battles and conditions that were faced.

The best way to discover these sites relating to the First World War is to follow the 'Remembrance Trails' that have been planned in the region. There are four of these covering different aspects of events such as the War Front and the Post-War reconstruction - see Remembrance Trails for details.

Note: the first ever tank battle in the world took place at Cambrai during the First World War.

Dunkerque is at the northern edge of the region and is the site of the largest ever sea evacuation, that of the Allied armies in May-June 1940, while historians will also be interested to learn that the great battles of Agincourt and Crecy during the Hundred Years War took place near the town of Hesdin, to the south-west of the region.

Other highlights in Nord-Pas-de-Calais 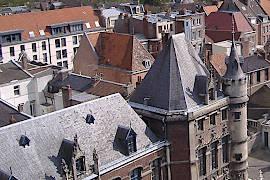 Belfries: Across northern France and Belgium there are a large number of belfries that have together been listed as a UNESCO World Heritage site because of their historic importance. You will come across several of these as you travel around Nord-Pas-de-Calais including an impressive example at Douai: see French belfries for more information and details of those in this region.

Outdoor activities: walking is a popular activity in most parts of Nord-Pas-de-Calais with numerous marked trails whether you are on the coast or exploring the countryside further inland.

We hadn't realised but the region has several hundreds of kilometres of canals and rivers, so canalside walks and fishing are very popular. Boat trips on the waterways are also a lovely way to pass an afternoon.

Gardens: We never visit any region of France without trying to visit some of the gardens in the region, and were pleased to find that there are a good number of impressive gardens that open to the public, often attached to equally impressive houses.

Among our favourite gardens in Nord-Pas-de-Calais are the Arboretum at the Manoir aux Loups (at Halluin to the north), with a very extensive and beautifully maintained garden, and the Gardens of Sericourt (to the south), but there are many others so be sure to ask at the local Tourist Office for details of any close to you when you visit.

Christmas markets: If possible try to also visit in December to enjoy one of the famous Christmas markets held in the region, for example at Lille, that attract shoppers from all across Europe.

Towns and villages in the Nord-Pas-de-Calais

Lille is a major city that has reinvented and renovated itself in recent years and now has much to admire. 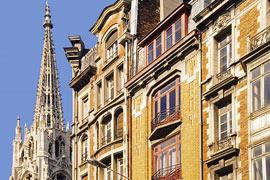 To the south of Lille, Arras is another of the most interesting towns in the region - as well as admiring the Flemish baroque style houses in the town centre be sure to also visit the Carriere Wellington Museum to learn about the lives of soldiers in the First World War.

Roubaix is a town to the north-east of Lille that has also reinvented itself very well, and is also well known as being the end point for the famous Paris-Roubaix cycle race each year.

In Roubaix be sure to visit the Museum of Art and Industry, as much to see the Art Deco swimming pool as the museum itself!

East of Lille and Arras there are some other towns that merit a visit when you are visiting, such as Cambrai, officially listed as a 'town of art and history', Valenciennes, and the spa town of Saint-Amand-les-Eaux in the heart of the Scarpe-Escaur Regional Natural Park. At Le Quesnoy there is an attractive walk around the ramparts.

At the village of Bavay you can see some of the most important Roman ruins in the region, while Maroilles is well placed to explore the Regional Natural Park de l'Avesnois and Solre-le-Chateau is a pleasant town wth an unusual church.. 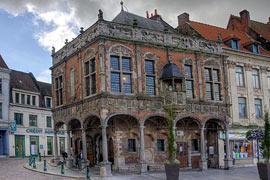 Between Lille and the coast, the town of Saint-Omer also has an interesting historical centre to explore, and there are several interesting monuments to see at nearby Aire-sur-la-Lys (to the south-east of saint-Omer).

The small town of Cassel (north-east of Saint-Omer) is very typical of those in the region and pleasant to stroll around, with its views across the plains below, perhaps followed by a trip to explore the village nearby at Esquelbecq with its castle and war memorials.

A few kilometres inland from the coast, to the east of Le Touquet, be sure to also visit the pleasant town of Montreuil.

France This Way suggest: a canoe trip along the tranquil Canche river near Hesdin and Montreuil in the south-west of the region

Map of Nord-pas-de-Calais and places nearby

See an index of places for each department: Nord communes and Pas-de-Calais communes