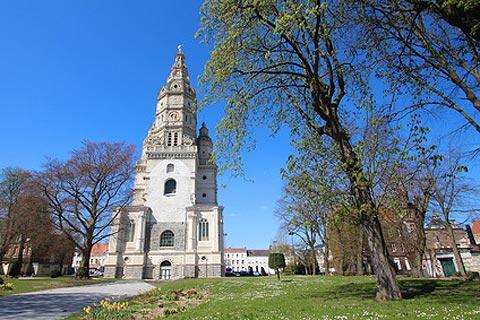 The town of Saint-Amand-les-Eaux is in the Nord-Pas-de-Calais region of northern France, on the border with Belgium to the north of Valenciennes and surrounded by the Scarpe-Escaut Natural Regional Park. The Maison du Parc, the visitor's centre for exploring the Natural Park, is in the town.

Apart from the easy access to the natural park, Saint-Amand-les-Eaux also attracts visitors due to its long established tradition as a spa treatment centre.

At one time much of what is now the town centre of Saint-Amand-les-Eaux was occupied by an extensive abbey complex, originally founded in the 9th century. Although little of the original grandeur remains today, most of the original abbey having been demolished after the revolution, the principal monuments in the town are remnants of the abbey, to be seen in the Grand Place in the centre of the town.

In particular you can see:

There are also other churches to be seen in the town including the Church of Saint-Martin, largely reconstructed in the 18th century in a neo-classical style, and the red-brick Church of Saint-Therese.

As far back as ancient Roman times the beneficial properties of the local water sources were recognised, and the first baths were established here more than 2000 years ago. These were rediscovered in the 17th century and the town again began to attract visitors to its baths.

It is due to these thermal waters and the treatments they offer that many visitors are attracted to Saint-Amand-les-Eaux, and you can also find suphur and mud treatments.

The principal thermal spa centre in the town is a modern development offering a wide range of treatments - see www.chainethermale.fr/saint-amand-les-eaux for details and reservations.

Mineral water bottled in the town is also available in shops across France.

Surrounding the town, the Scarpe-Escaut Regional Natural Park takes its name from the two rivers that traverse the park - the Scarpe and the Escaut - and around which many of the leisure opportunities are based. It was the first Natural Park to be designated in France, in 1968.

The landscape is a varied mix of forests and villages, rivers and farmland, and there is a great deal to enjoy. Visit the Maison du Parc in Saint-Amand-les-Eaux for details of walks and cycle routes and other suggestions when you arrive.

Map of Saint-Amand-les-Eaux and places nearby

Visit near Saint-Amand-les-Eaux with France This Way reviews

Plan your visit to Saint-Amand-les-Eaux, Nord