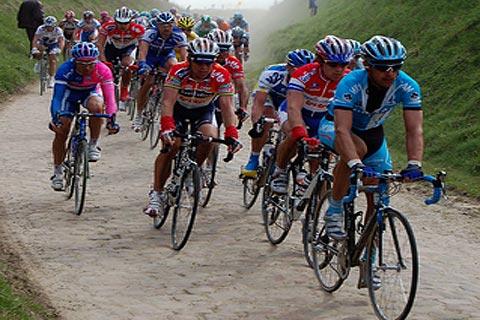 Roubaix is located near the north-eastern frontier of France (with Belgium), and to the north-east of Lille (to which it is connected by metro). It is a substantial town of 100,000 inhabitants. Although it has its fair share of less interesting sections, the bustling town has several attractions, and is a pleasant place to visit.

Historically an industrial textile centre, a great deal of effort has been put into the restoration and improvement of the old industrial buildings in Roubaix which now have new uses - the most popular is perhaps the extensive 'factory price shopping' centre. The Archive for the World of Work buildings are another good example, in a converted cotton mill. 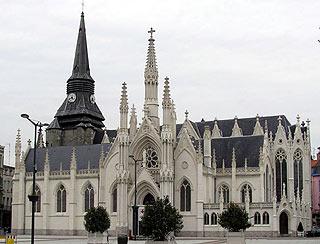 We particularly enjoyed visiting the very stylish Art Deco municipal swimming pool, now housing the Museum of Art and Industry (the Musée la Piscine). Go in to see the interior even if the museum doesn't interest you!

The architectural monuments in Roubaix also include the bombastic town hall, built 100 years ago when Roubaix was an important industrial centre.

You will discover two churches in the town:

- the decorative interior of the church of Saint-Joseph

On a much smaller scale, Roubaix also has many tiny houses built for the workers at the end of the 19th century - consisting of just two small rooms, one on top of the other, and facing on to public courtyards. One of this is a listed historic monument - Le courée Dulbar Dekian, on Rue Jean Moulin next to the Soho Cafe.

If you need to escape from the bustle of Roubaix town centre, the large Parc Barbieux is a pleasant green space within the town, and there are several other gardens and parks - hence the town's classification as a 4* ville fleurie.

Roubaix is perhaps best known for the action-packed one day cycle race that arrives here each year. Taking place during the spring, the Paris-Roubaix race covers 260 kilometres to reach Roubaix. A substantial part of the course is across cobbles and in rough conditions - challenging at the best of times, and very challenging in wet, cold weather.

Note: the race now actually starts at Compiegne north of Paris, because a number of roads on the original route had been rebuilt, losing the cobbles that add to the thrill of the event - hence a new route with more cobbles was found.

The most popular destination close to Roubaix is certainly Lille, which has an extensive and beautifully restored historic centre.

Map of Roubaix and places nearby

Visit near Roubaix with France This Way reviews

Plan your visit to Roubaix, Nord

The French version of this page is at Roubaix (Francais)