Douai is a substantial town in the north of France, between Lille and Cambrai.

France This Way comment: although not well known as a tourist destination, the belfry with the town hall and the Place d'Armes together with the narrow streets of the old town and a promenade or boat trip in the waterfront area together make a visit to Douai a pleasant way to pass a day...

The old town in Douai is an interesting mix of different architectural styles including the Flemish style that we associate with this region and 18th century French style town houses, as well as several houses in the art deco syle. 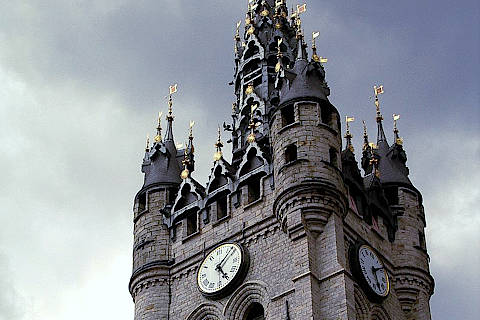 The centre of the town and where your visit will start is the Place d'Armes, a large pedestrianised square with various attractive buildings, trees and a modern fountain. Douai Tourist office is in an 18th century house called the Hotel du Dauphin on this square and they can suggest a route to follow as you explore.

Close to the Place d'Armes, the 15th century belfry has one of the biggest sets of bells in Europe - incorporating 62 bells. The outside has four small towers and a beautiful spire in the style of Gothic architecture. The belfry was painted by Corot (the painting is now in the Louvre) and Victor Hugo said it was the most beautiful belfry in France.

The belfry is especially attractive at night when it is illuminated, and is listed as a UNESCO heritage site along with several other belfries in the north of France and Belgium. The belfry can only be visited as part of a guided tour, and during your visit you will see the bells and several rooms as well as the views in all directions across the rooftops of Douai from the top of the belfry.

Next to the belfry and part of the same building, the town hall in Renaissance style is built around a courtyard and is another impressive building: inside the town hall as part of your visit to the belfry you can see the monumental staircase and several of the function rooms such as the Marriage Room and the Gothic Room (in reality this room was designed in the 19th century and is not medieval but it is impressive all the same). 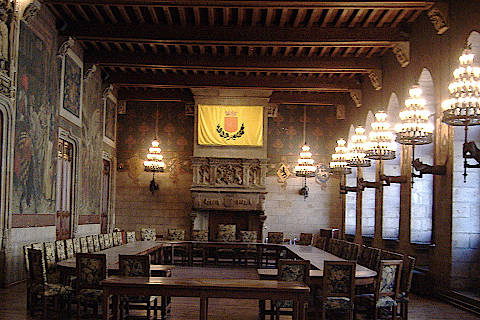 The collegiale church of Saint-Pierre in Douai is the largest church in France to the north of Paris. It was built in the 18th century and combines the gothic style with the classical style: the interior includes a painted dome although the building is otherwise rather more plain than you might expect. It has recently been renovated and includes a good exhibition of religious paintings.

The Porte d'Arras with two imposing towers and a drawbridge was once part of the fortifications that helped to protect the town, although there are now no walls either side of the entrance because these were cleared away to make room for the boulevards around the town.

In Parc Bertin at the eastern edge of the historic town, you can see a large gateway with three arches that was also built in the 15th century as part of the fortifications of Douai. The upper level was added in the 18th century to be used as a prison and the two side entrances were added in the 19th century.

The Scarpe area of Douai is a pleasant waterfront part of the town with boats and several attractive stone houses. An important historic building next to the water is the Parliament of Flanders, a charming building in red brick and incorporating white stone arches that was originally an abbey built in the 16th century. You can take a boat trip along the water.

The Musee de la Chartreuse is one of the most visited destinations in Douai and exhibits a good selection of Flemish painters as well as French painters such as Corot and Renoir, covering the 16th to 19th centuries. The paintings and statues are partly exhibited in a baroque style chapel, and the Museum also has a small garden.

Douai is known as the City of Giants - the Ville de Géants - because of a tradition that is popular here, and in other towns in the region, of havng a festival in the summer that incorporates giant figures: these are such a longstanding local tradition that the giants are inscribed as a UNESCO cultural tradition to be preserved!

In Douai the giants represent the Gayant family, a mother and father and three children, and a history that dates from the 15th century. Other giant 'puppets' are also part of the festival that is held at the beginning of July and includes a very popular procession of the giants: they are very heavy and the hidden structure of each Giant contains several inhabitants of the town required to support and move the weight! 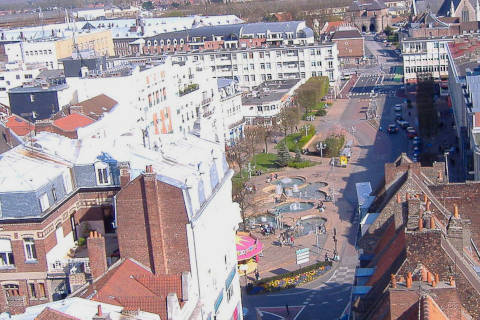 The Parc de Loisirs Jacques Vernier on the edge of Douai is a large leisure park with several ponds and various childrens activities. The main park and gardens are open to the public with no entrance charge.

There is a chance to enjoy the local countryside with a walk in the Réserve naturelle régionale du Marais de Wagnonville to the north of Douai and along the Escrebieux, subsidiary of the Scarpe river.

Map of Douai and places nearby

Visit near Douai with France This Way reviews

Plan your visit to Douai, Nord

Regular market(s) are held in Douai each Wednesday & Saturday. (Markets are held in the morning unless stated.)

The French version of this page is at Douai (Francais)