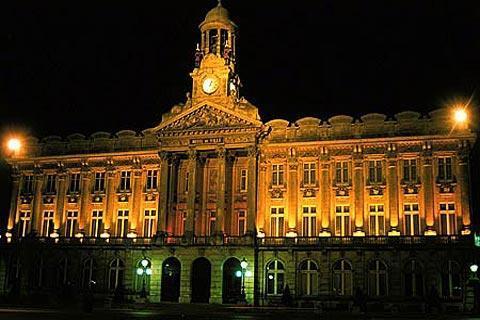 Cambrai is in the Nord department of the Nord Pas de Calais region, south-east of Arras and north of Saint-Quentin. The story of Cambrai is forever part of the story of the First World War, where it was infamously at the centre of the world's first tank battle. Not surprisingly this did little for the architecture of the town!

France This Way comment: despite this tumultuous past the town is interesting to visit and has several monuments for visitors to see as well as a vibrant town centre and the town is now oficially classed as a 'town of art and history'.

A good place to start your visit to Cambrai is in front of the town hall. This is a 19th century classical style building with a decorative clocktower from which automated characters emerge to ring the hourly bell that faces on to the large central cobbled square in the centre of the town.

In fact there are several large open squares that dominate this part of Cambrai:  the Place de la Republique, the Place Aristide Briand, the Place du 9 Octobre and the Place du Marché, and the surrounding streets contain various interesting houses, typically dating from the 18th century. 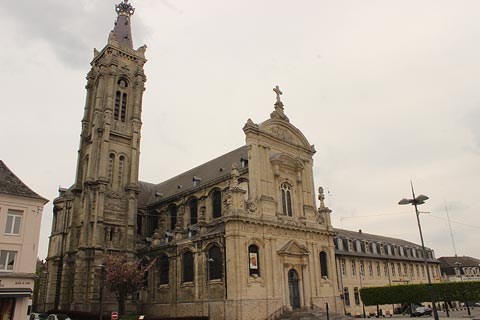 The religious monuments are among the highlights of a visit. The cathedral, built at the end of the 17th century to replace an earlier cathedral, is in the classical style popular at the time and has a noteworthy facade and tower, and contains a famous organ.

Within the cathedral you can see an icon called 'Notre-Dame-de-Grace' which shows the Virgin Mary and child and has been an important site for pilgrims since medieval times. It is also part of a ceremony that takes place in Cambrai each 15th August.

The Church of Saint-Gery is the oldest in Cambrai in origin, although the current building was constructed in the first half of the 18th century in the classical and baroque style. Inside the church is a painting by Rubens - La Mise au Tombeau. The Chapel of Jesuits opposite the cathedral is also worthy of a visit, with its ornate facade and interior being one of the best examples of baroque architecture in the region.

The belfry of Cambrai and originally of St Mary's Church dates from the 15th century and is one of those listed as a UNESCO World Heritage Site under the category 'Belfries of France and Belgium'. It is the dominant feature of the main square though many of the buildings on the square are built in the Flemish style and give to the square its attractive appearance.

After admiring these religious monuments take a look at the Tourist Office in Cambrai - it is based in a very fine medieval house dating from 1595, and the wooden sculptures that once decorated the outside of the building can now been seen inside.

The Chateau de Selles to the north-west is also one of the oldest parts of the city.

The Museum of Fine Arts in Cambrai is also very substantial and contains a wide range of items, including a statue by Rodin, several paintings by Velazquez and works by various other notable French and Flemish painters, and numerous other items covering the entire period from prehistory onwards.

There are lots of impressive statues from the earlier cathedral of Cambrai, destroyed during the revolution and you can also see a 'sound and light' exhibit that explains the history of the town in the Museum. 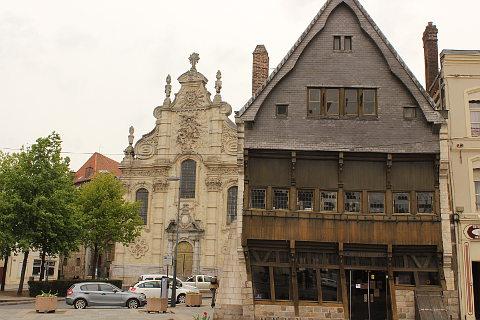 After exploring the town centre you can head to the extensive public gardens to the east for a stroll, and to see the modernist 'Palais des Grottes' centre.

Head east from Cambrai to Le Cateau - the birthplace of Matisse, and now home to a museum/gallery dedicated to the artist.

Map of Cambrai and places nearby

Visit near Cambrai with France This Way reviews

Cambrai is classified as a listed town of Art and History

Plan your visit to Cambrai, Nord

Regular market(s) are held in Cambrai each Wednesday & Saturday. (Markets are held in the morning unless stated.)

The French version of this page is at Cambrai (Francais)