The town of Le Quesnoy is in the Nord department, in the north-east corner of France to the east of Cambrai and just a few kilometres from the border with Belgium.

Curiously, the town only became part of France in 1659 when the Treaty of the Pyrenees was signed: before that it was for a long time part of Spain's territory in northern Europe.

France This Way comment: the main reason to visit Le Quesnoy is to follow the walk around the ramparts that surround the town, but you will also want to take a stroll through the town centre while you are here to see the town hall and belfry. 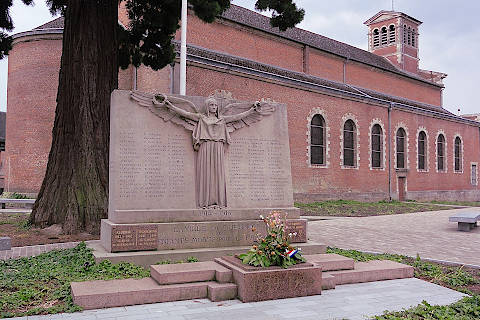 You can enter the town through the Porte Fauroeulx, the only remaining gate through the ramparts after the others were destroyed during the Second World War. The gate has two arched entrances in stone.

One of the main monuments in Le Quesnoy town centre is the Church of the Assumption, which is quite plain but contains an interesting statue of "Christ aux Liens" (trans: "Christ tied up"). The belfry that dominates the town centre is also noteworthy, and has a group of 48 bells as well as four clocks. The attached Town Hall, like the belfry, is in the classical style and features an imposing staircase.

The ramparts around the town were originally built by the Spanish to defend the town, then later reinforced in the 18th century by Vauban, a famous French military engineer, and further reinforced over the following 150 years until just before the First World War.

There is a walk that follow the ramparts all the way around Le Quesnoy, mostly through parks and trees. You also pass three large lkes and ponds during the circuit, so it is a very pleasant tour to make.

The walk is about four kilometres long and takes about 1 1/2 hours to complete if you aren't tempted to stop for a picnic...You can ask for a guide from the Le Quesnoy tourist office on Rue Maréchal Joffre but it is not really necessary.

(A bastion is part of a defensive wall that extends beyond the walls of a ramparts, allowing the main wall of the ramparts to be better defended, and typically replaces towers used at regular intervals in earlier defensive systems.)

Note: quite a lot of improvements have been made to the lakes and terraces of this walk quite recently so even if you have already followed the rampart walk in the past you will want to do it again. 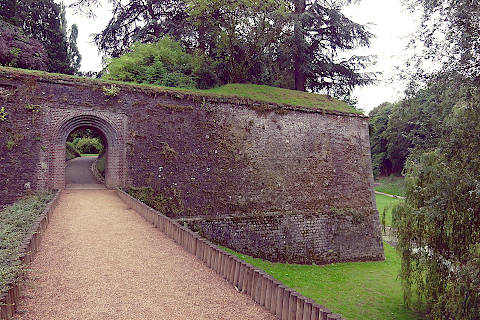 Le Quesnoy falls within the borders of the Region Natural Park of l'Avenois, an extensive area of fields and woodland which offers various opportunities to enjoy walking and cycling in the region: ask for details in the tourist office. The walks in the Mormal forest pass by a lake and through an arboretum and are on the edge of the town.

The town of Cambrai is close to here and interesting to visit with several imposing buildings.

Map of Le Quesnoy and places nearby

Visit near Le Quesnoy with France This Way reviews

The French version of this page is at Le Quesnoy (Francais)