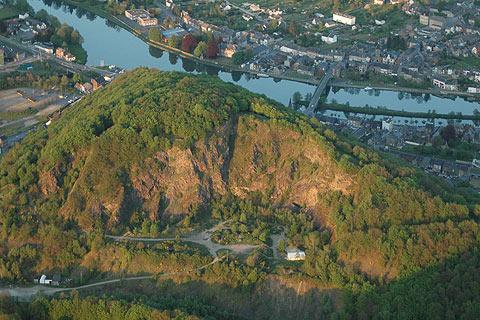 Vireux-Molhain is a small town 10 kilometres south-west of Givet in the northern Ardennes department.

The sites of interest in Vireux-Molhain are varied, and the most important are the fortified site of Mount Vireux, the collegiale church of Saint-Ermel and the nature reserve

40 years of archaeological excavations on Mount Vireux have identified a fortified site of the Late Roman Empire as well as many objects such as silver coins, pottery, an iron key, and a horseshoe. Thanks to these findings we can date the various phases of occupation of Mount Vireux (Roman period, period Merovingian, Carolingian period).

According to researchers, the first buildings date back to the early reign of the Gallic emperor Postumus (to 260) and the various discoveries show the presence of important economic activities such as trading and merchant iron metallurgy.

Today, Mount Vireux is an ideal place for walks, having been converted into a nature trail where visitors can experience the exciting historical past of viroquois and the magnificent views. The panoramic photo above is a view of Molhain, the dull d'Aune, castle, church and the river Vireux-Wallerand.

The collegiate church of Vireux-Molhain

History has it that the St Ermel college was founded in 752 by Lady Ada, widow of the Count of Poitiers and Wibert cousin of Pepin the Short. The legend also says that Pepin the Short, Charlemagne's father, is buried here.

The most important treasure the church contains is a polychrome 'Entombment' in wood dating from the late fifteenth century. The jewel of the college is the crypt of the High Middle Ages: vaulted on pillars it dates from the Carolingian period. You will also notice the series of tombstones, with decor and furnishings representative of the Italian Renaissance, the wonderful polychrome wooden statues of the sixteenth century and seventeenth-century altarpiece, which adorn the building.

Located on the French-Belgian border, the customs wall is named after the former customs house that stood here on the road D47 that links Vireux-Molhain (France) to Couvin (Belgium). The Customs Wall is now the Vireux-Molhain Nature Reserve, a protected environment full of wonderful legacies.

Known to geologists since the nineteenth century, an abundance of fossils have been found, and also a great diversity of natural species. After being discovered the site quickly became known internationally, and professionals were not the only ones to do research - they were soon joined by collectors and enthusiasts.

Over the years, the partial destruction of the deposit worsened, which prompted the creation of a Nature Reserve. Since 1991 it has controlled the uncontrolled exploitation of fossils, to ensure the conservation but also the study of these ancient life forms (dinosaur bones, swimming animals ...) The conservation of this fragile site involves a few basic rules that the visitor is asked to respect:

The principal attractions close to Vireux-Molhain are based along the valley of the Meuse river and in the Forest of the Ardenne.

Map of Vireux-Molhain and places nearby

Visit near Vireux-Molhain with France This Way reviews

Plan your visit to Vireux-Molhain, Ardennes

The French version of this page is at Vireux-Molhain (Francais)