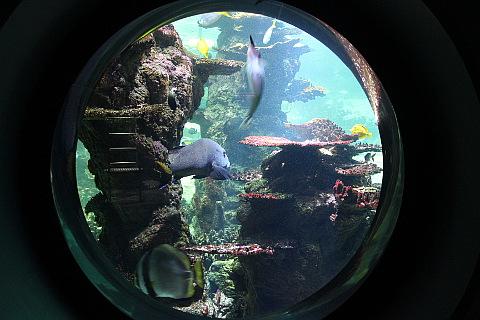 The Nausicaa Sea Centre is both an excellent aquarium and a centre for studies of the sea and in particular to raising awareness of the need to respect the sea and its resources.

Nausicaa is one of the top ten tourist attractions in France and attracts around 600,000 visitors each year. The centre is based at Boulogne sur Mer in the north of France. Calais and the Channel tunnel is twenty minutes away and Paris less than 2 hours.

When you arrive in Boulogne head along the beach front and you will find the large Nausicaa building. It is well sign-posted and there is an underground car park beneath the centre.

One of the first displays you come across is a tall tank of beautiful small jellyfish, reminiscent of that in the Will Smith film 'Seven Pounds'.

The early parts of the centre are devoted to exploring sea life in different parts of the world and each region is accompanied by  aquariums filled with marine life from the region and videos and exhibitions relating to the marine life in the area as well as the impact of man on the ecosystem. 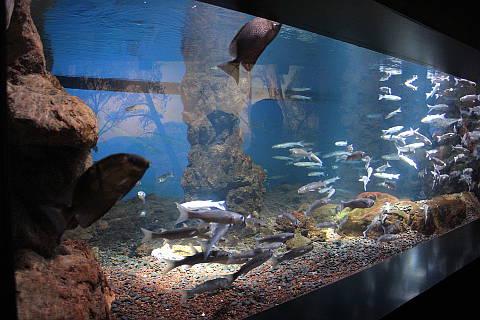 Heading towards the open sea you are suddenly in front of a huge inverted pyramid containing 45000 litres of water. Inside a school of tuna can be seen swimming past above your head! 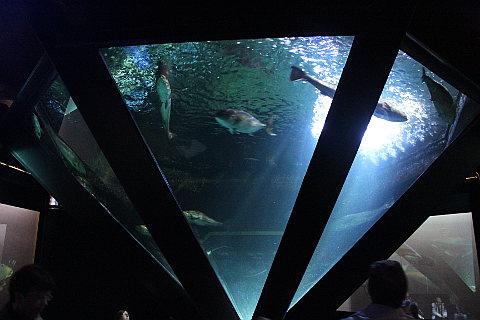 The depths of the open sea reaches up to 11,000 meters and contains species that travel thousands of kilometers to breed!

One of the highlights at Nausicaa is its living reef. This is one of the biggest cultivated reefs in the world and has been made using traditional gardening techniques such as cuttings and grafting of the coral in order not to destroy reefs in the wild.

The underwater observatory is fabulous. On one side you have the lagoon full of beautiful corals and teeming with life. 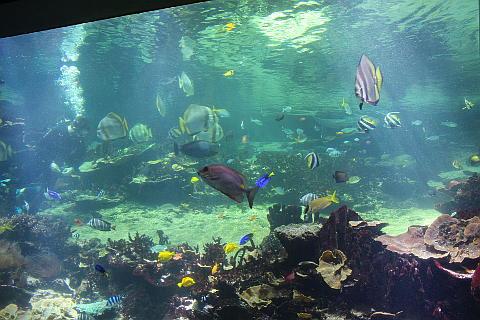 At certain times of the day you can ever see the divers in the tank cleaning the glass and checking out the corals. Look out for the zebra shark 'swimming' with the tropical fish. Unlike other sharks the zebra shark spends long periods resting on the sea bottom. It eats molluscs and crustaceans and so do not be alarmed for the beautiful tropical fish in the same tank!

On the ocean side you can get a close up view of some of Nausicaa's impressive collection of sharks. 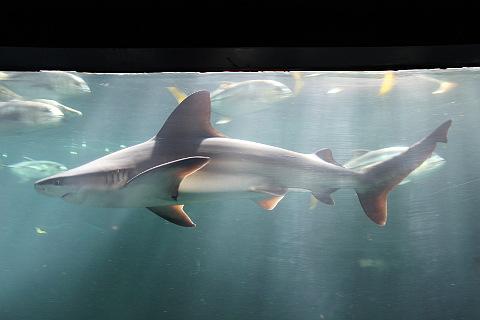 In all Nausicaa has over 140 sharks of 13 different species including sand tiger sharks, sandbar sharks, nurse sharks, leopard sharks and zebra sharks. The sight of these magnificent species is one of the big draws of NAUSICAA and always has plenty of admirers. 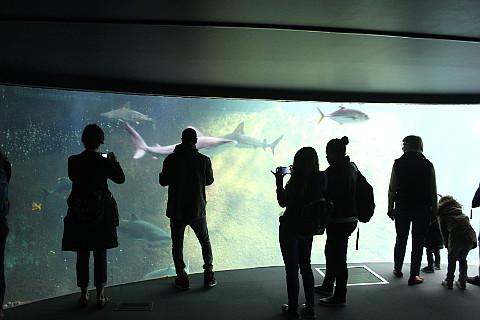 As with all of NAUSICAA's exhibits the shark tank has an educational as well as an entertainment role. Shark populations in the wild are fragile with a staggering 100 million sharks disappearing every year and one third of shark species on the endangered list. The sandbar shark is on the Red List of vulnerable species and yet is one of the most consumed species in the world. It is captured for its fins, its flesh,  its skin and oil. It is also used in Chines medicine.

As well as raising awareness NAUSSICAA is part of a breeding program and since 2013 five new sharks born in a partner aquarium are now in the ocean tank.

In need of refreshment after all the excitement? The tropical lagoon bar overlooks the lagoon and ocean tank from above and is a great place to take a break. 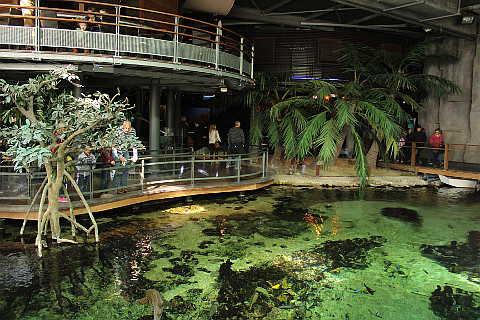 Another highlight is the recently refurbished sea lion area. Walk through a glass tunnel suspended in a million litres of water and sea the sea lions swimming all around you. Then enter the Californian reserve which is home to the six Californian sea lions. A daily show allows visitors to admire the intelligence of the sea lions. 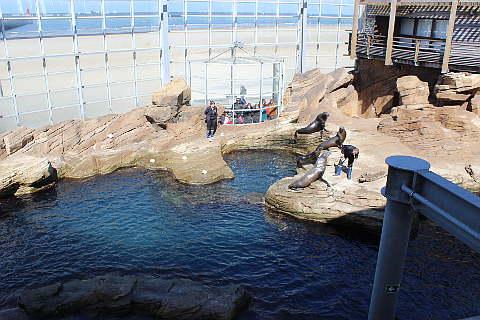 Californian sea lions were an endangered species on the west coast of America and now the Channel Islands have been classified as a national park to protect them.

Further attractions include a large 'touch tank' where you can touch the 'wings' of large ray fish; a virtual trip on board the oceanographic research ship 'Thalassa', the manchot penguin area and the submerged forest where you are surrounded by the sounds of monkeys and birds and of course the constant croaking of frogs.

Before leaving Nausicaa you can enjoy a light meal in the Bistro which has great views straight over the Boulogne beach. 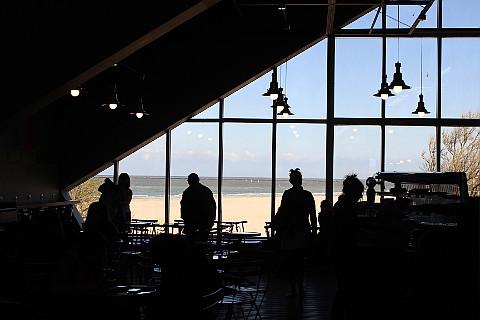 Map of Nausicaa and places nearby

Visit near Nausicaa with France This Way reviews

Plan your visit to Nausicaa, Pas-de-Calais

The French version of this page is at Nausicaa (Francais)