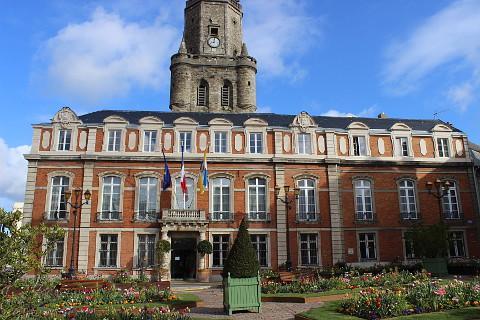 Boulogne is a town on the Opal Coast in the Calais region of northern France, at the mouth of the River Liane. The 'proper' name for the town is Boulogne-sur-Mer. Despite the opening of the channel tunnel and reduced ferry passenger volumes Boulogne is also still an important cross-channel ferry port, bringing visitors and holidaymakers from the UK.

It is the sea-facing side of Boulogne-sur-Mer that lies behind the long history and development of the town: 2000 years ago Boulogne was the main port for Roman trading activity with England, and today it is still the most important fishing port in France.

France This Way comment: even if you are spending your visit elsewhere in France, we suggest you allow time to explore Boulogne-sur-Mer if you are passing through!

Boulogne is a pleasant resort with nice sandy beaches and an interesting town centre, and a visit is worthwhile. Apart from the beach, it is the old town around the ramparts, castle and cathedral where your visit will focus.

You can enter the old town through one of the four original gateways through the defences. A good way to start to explore the town is then to follow the walk around the 13th century ramparts of the old town, which have good views both into the old town and out to the sea and across the 'new' town.

The old town is small and interesting to explore, and many of the properties have been extensively restored in recent years. 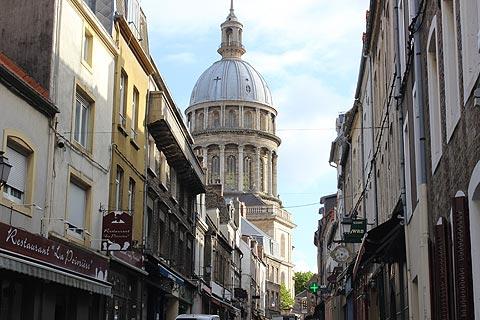 Within the old town it is the Basilica of Notre-Dame that will first catch your attention - or at least the cathedral dome which dominates the skyline and is one of the largest in Europe. The cathedral was built in the middle of the 19th century to replace the previous cathedral that had been destroyed during the French revolution.

Inside the cathedral it is also the view into the 101 metre high dome from below that is the highlight. The substantial crypt below the cathedral holds the treasury, with many decorative items in gold and silver.

The Rue de Lille, just outside the cathedral, is a pleasant pedestrian street with shops and cafes.

Another substantial monument is the castle that forms part of the fortifications. The drawbridge and moats are still intact (or rather, have been reinstated), and inside you can see such grand rooms as the salons and the chapel. A museum, featuring many interesting exhibits and an impressive collection of Egyptian artefacts, is housed within the castle (and has been for almost 200 years).

The belfry in Boulogne is also of interest. It is one of a series of belfries across northern France and Belgium that are now listed as a UNESCO World Heritage Site. Built as part of an earlier castle in the 12th century it is also the oldest building in Boulogne-sur-Mer.

Below the belfry you can see the imposing 18th century Town Hall. The facade of the neo-classical style Palace of Justice is another important monument here, with statues of Napoleon and Charlemagne inset either side of the building. In front of the town hall there is a pretty garden and inside is a small courtyard containing a Japanese garden. You can go inside the town hall and visit the 'salle des Gouverneurs' with its pretty oak panelling.

Boulogne has also been classified as an official Town of Art and History in France. 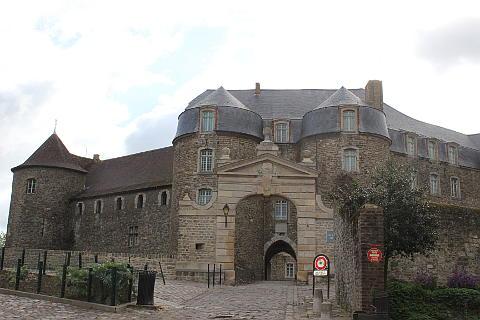 Napoleon and the Imperial Town

Some of Boulogne's most impressive buildings date from the time when Napoleon was based here in Boulogne: his 'grand army' were based here in readiness for the conquest of England)

The buildings from this period include the Imperial Palace, which can be found inside the fortified old town; the poudrière Napoléonienne, or gunpowder building which sits on a cliff overlooking the beach; and, further down the coast, the Grand Colonne which stands on the site where Napoleon once looked across the channel as he planned his attack on England. This column is the highest in Europe!

Boulogne-sur-Mer is now home to the French National Marine Centre, the impressive Nausicaa sea-life centre, and is very worth visiting to see a wide range of marine wildlife and also to learn about the impacts of over-fishing and pollution on the sea - Nausicaa has an impressive focus on the environment, sustainable development and the impact of tourism. Note: although Nausicaa has a serious goal it doesn't reduce the pleasure of a visit!

Nausicaa is now one of France's top 10 tourist attractions: see Nausicaa for information.

Boulogne-sur-Mer sea front has a long flat sandy beach. Because of the docks it is not one of the prettiest beaches in the world but the large size and golden sand is a big attraction in the summer. Look across the sea and you can see the 'white cliffs of Dover' gleaming in the sunshine. 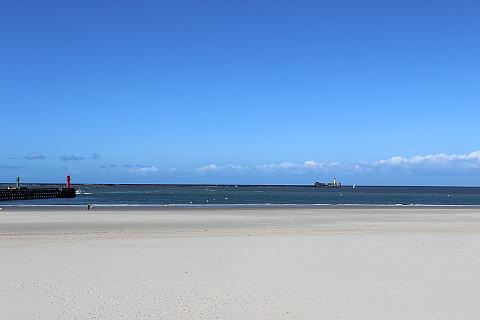 You can visit a typical fishermans house, 'La Maison de la Beuriere', in the fishermens's quarter. Climb the steps of Rue de Machicoulis to find the cottage. Inside you can see typical furniture and clothing of fishermen at the turn of the 20th century.

Also on the sea front near to the Nausicaa centre take a look at the "Calvaire des Marins". This calvary is built in the shape of a ship's hull and its chapel is decorated with buoys: coloured buoys for boats at sea and black and white buoys for boats lost at sea.

Other nearby towns which also have belfries listed by UNESCO include Aire-sur-la-Lys and Cambrai.

There are various and varied places of interest near Boulogne including the popular seaside resort of Le Touquet, the natural scenery of the Cap Blanc-Nez and the Cap Gris-Nez and traditional towns such as Montreuil.

Map of Boulogne-sur-Mer and places nearby

Visit near Boulogne-sur-Mer with France This Way reviews

Plan your visit to Boulogne-sur-Mer, Pas-de-Calais

Regular market(s) are held in Boulogne-sur-Mer each Wednesday. (Markets are held in the morning unless stated.)