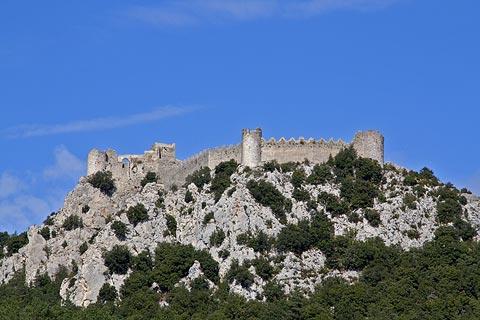 The Château de Puilaurens, one of the most impressive examples of medieval castle architecture in the Languedoc-Roussillon region, is one of the famous 'cathar castles' of southern France. The castle is at an altitude of 697 metres above the Boulzane valley, in Lapradelle-Puilaurens to the south of Carcassonne and in the Aude department of the Languedoc-Roussillon region.

The location of the Château de Puilaurens on a rocky ridge high above the surrounding countryside is particularly remarkable even among the cathar castles!

A castle existed here possibly as early as the 10th century, initially within the control of the Abbey of Saint-Michel de Cuxa then later under the control of Aragon, part of the Spanish territories. 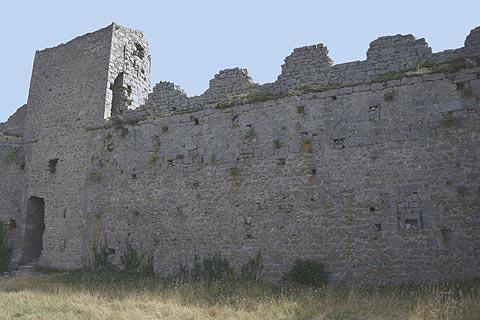 The association with the cathars started around 1241 when a cathar deacon called Fenouillèdes stayed here, then from 1245 to 1246 various cathar men and women stayed in the castle. The castle at Puilaurens was never actually captured by Simon de Montfort during his crusade against the cathars because at that time it was under the control of Aragon so not part of the territory captured by Simon de Montfort.

After the end of the cathar suppression and around the middle of the 13th century the castle fell into the hands of the French monarchy and was substantially reinforced in order to play an important role in defending the region against attacks on the region from the Aragons from Spain. The most southern castle in France, the Château de Puilaurens was never successfully taken by the Aragonese.

A substantial part of the castle we see today was part of this 13th century reinforcement, so was constructed after the cathars had left the Château de Puilaurens.

The castle retained its military role until 1659 when the Treaty of the Pyrenees established a border between France and Spain that was further south than this region. From this time onwards there was only an occasional military presence in the castle, then after the revolution it was abandoned completely.

Access to Château de Puilaurens is along a steep rocky path and staircase on the south side of the rock that zig-zags up the rock before arriving at the castle walls.

The castle ruins are high on a rocky spur and in quite good condition so much of the original castle structure can still be seen, including the substantial ring of crenellated defensive walls.

The ring of castle walls is still largely intact. You can also see the towers and posterns that formed part of the defences as well as the main courtyard, the water tank and castle keep as well as the little things that help bring ancient castles to life such as medieval toilets and arrow slits. There are also many places in the castle with very impressive views across the surrounding hills. 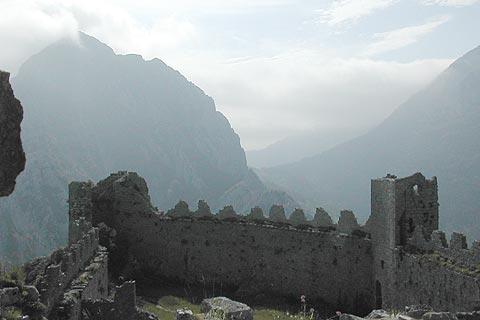 Entrance costs around 5 euros per adult, 3 euros for children up to 15 years old. Château de Puilaurens is open every day from April 1 to September 30th, weekends only from 1 February to 31 March.

Map of Chateau de Puilaurens and places nearby

Visit near Chateau de Puilaurens with France This Way reviews