You are here: French HistoryCathars in France

The cathar castles of southern France are among the most fascinating castles in France, both because of their dramatic locations and the tales of bravery and persecution that surround them.

No visit to the cathar castles would be complete without some knowledge of the cathar religion itself, to better understand the events that unfolded here

The Cathar religion has its roots in eastern religions of 2500 years ago, with the ideas of Zoroastre (Zarathoustra) that the world consisted of two opposing forces, representing good and evil. Many subsequent religions take this starting point, and the Cathar religion that arrive in Europe via the Balkans in the 11th century is one of these.

Although it shares many principles with Christianity, the Cathar religion differs from the Christian religion in some important respects. Marriage was outlawed, as was the private ownership of property. The cathars believed in reincarnation as a path towards eternal life, were strictly vegetarian, and had to abstain from all sexual pleasures. The abstinence from sex was because the cathars believed that a good soul, created by God, was trapped in an evil body, created by the devil. The goal was to reach heaven, not to perpetuate life on an evil earth.

The goal of the cathar religion was to obtain purity, to become 'parfaits'. As with all religions perhaps, the number of truly dedicated, who followed the rules to the letter, was substantially less than the number who broadly supported the principles of the religion but did not forego all earthly pleasures.

The word kathari, from which cathar is probably derived, is the Greek word for pure.

The Cathars in France were based largely in the Languedoc region, near Toulouse, and Albi and Carcassonne, with a popularity arising at least in part as a reaction to the over-excesses of the Roman Catholic church. The Cathar religion was supported by many in the region, both peasants and nobles alike - perhaps 10% of the population were supporters.

At this stage, the Toulouse Counts owned large parts of the south of France, and were more 'modern' than the northern part of the country, rejecting the feudal structures of northern France. It was also this 'modernism' - for example, cities were allowed to elect their own representatives - that helped allow the Cathar religion to spread.

Initially attempts were made to unite the Cathars and the Catholics, but these were not successful. The Catholic church considered the Cathar religion as heretical, because it rejected significant parts of both the old and New Testaments, including the notion that God created a fundamentally good earth. Cathars attributed the creation of the heavens to God, and the Earth to the devil.

Early in the 1208 a papal legate was murdered by a representative of the Count of Toulouse (quite possibly without his knowledge or support) and this provided a pretext for the Pope to launch a crusade against the Cathars - the Albigensian Crusade - because of the threat the Roman Catholic church believed it poised to their authority. In reality, the Crusade has as much to do with controlling the southern nobles as defeating the Cathars, and it was with the support of the King and northern nobles that the crusade was launched.

The Cathars, Simon de Montfort and the Albigensian Crusade

The Albigensian crusade arrived at Beziers early in 1209. the city refused to hand over the heretics, and soon after, the city fell and more than 20,000 people were killed. It was for this battle that the infamous words 'Kill them all - God will recognise his own' were spoken by Pope Arnaud Amaury. Following this, the other fortified cities did not put up a battle.

Carcassonne, not especially fortified at that stage, put up a fierce battle but were eventually defeated after their water supply was cut off. The city was placed, most unfortunately, into the hands of Simon de Montfort, who spent many years battling against the Cathars of the region.

The crusaders returned home, but the Cathars continued. they prepared many fortified towns and fortresses that they considered impregnable. It was against these that Simon de Montfort and his army fought bitterly for the next nine years. There are many terrible stories of the burnings, slit throats and slaughters that followed the fall of each of these fortified towns.

It was at Castelnaudry that Simon de Montfort first faced a united army assembled by the Counts of Toulouse and Foix. Both sides claimed victory in the battle that followed. But by now both the King and the Pope were becoming increasingly concerned about Simon de Montfort and his activities in the south, fearing that he would take personal control of the region. The army of the Count of Toulouse was thus reinforced by the King's army, in preparation for the next battle - the Battle of Muret. However, despite outnumbering Simon de Montfort's army by ten to one, they lost the battle. Soon after Toulouse itself surrendered and the count of Toulouse Raymond VI fled to England. The south was completely in the hands of Simon de Montfort.

In 1216 Pope Innocent III died, and Raymond VII of Toulouse returned, with his father Raymond VI, to his city. The inhabitants had evicted the invaders, and simon de Montfort set a long siege against the city. This continued until June 1218, when a stone from a catapult killed de Montfort. Although his son tried to continue the battles over the following years, Armaury de Montfort was not as accomplished as his father, and by 1222 he abandoned his region to the French king and crown. Shortly after, the Counts of Toulouse and Foix and the King of France all died.

The royal crusade against the cathars in France

On the 15th of January 1224 Armaury de Montfort left the reion and some semblance of normality returned. The lords re-entered their castles, and the Cathars slept more easily. But the new King of France, Louis VIII, saw an opportunity to recapture the lands in the south, and with the support of the new Pope, Honorius III, a new crusade started in May 1226. 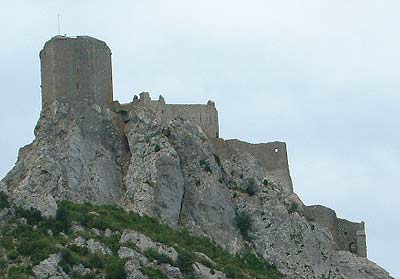 The crusade was a partial success, defeating all the towns except Toulouse, until the new King became ill and died. However Toulouse was forced into a treaty - the Treaty of Meaux - that provided for the marriage of his daughter to Louis IX son, so that all his lands would pass to the French throne when he died.

It was following the Treaty of Meaux that the inquisition procedures were set-up, that were to play such a large role in the shaping of the region in the years to come. The Inquisition, acting initially for the Pope, had complete authority to crush heretics and the Cathars.

Taking refuge in the fortified castles, such as those at Queribus and Peyrepertuse, the Cathars were increasingly suffering and oppressed. Despite an attempt in 1240 by the conquered lords to retake their provinces, the battle was largely lost by this stage, and eventually Peyrepertuse castle was taken by the invaders.

The 'impregnable' fortress at Montségur was eventually defeated and hundreds of people thrown to their deaths in an enormous fire near the fortress. This defeat also marked the end of the hopes of the Cathar religion in the region. Queribus and Puilarens castles were defeated in the following years, the Count of Toulouse died without a male heir, and soon the whole of Languedoc became part of France and the French crown.

Footnote: the last known Cathar was Guillaume Bélibaste, who was burned alive in 1321, finally putting an end to more than a century of battles and burnings in the region.

The castles are now a popular tourist attraction in the Languedoc region. Their frequent links with other legends such as the legend of the Holy Grail does little to reduce their popularity with visitors!