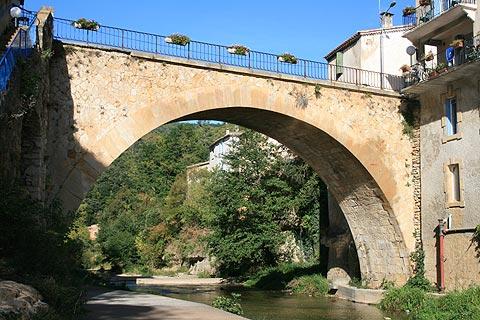 Rennes les Bains is a village situated south of Carcassonne in the Aude Department. The town originally developed here in Roman times with the discovery of the local thermal waters, and several roman artefacts have been found here including a statue of Mercury.

Rennes les Bains actually has both hot and cold springs, and two wells that were dug in the 19th century. Because of the unusual geological characteristics of the rock the water in the river Sals is naturally salty (hence the name of the river), which is of course very unusual for a river. 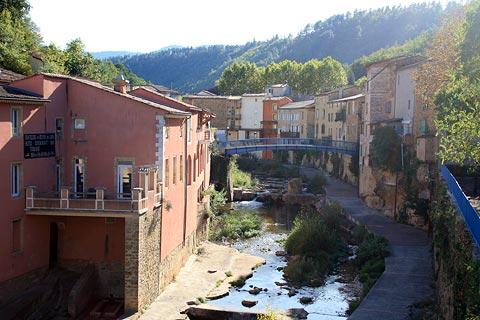 The village itself lies along the valley bottom with the tall houses of the town hugging the waters edge, some of them having balconies situated over the river. The river is crossed by both a stone bridge and a more recent pedestrian iron bridge.

You can also see the small, very old, church of Saint-Nazaire and Saint-Celse in Rennes-les-Bains, and a small part of the original Roman baths, although these are both quite minor historic monuments.

As well as admiring the views along the river, the village is now best known for its spa complex which has an outdoor pool that is naturally heated to 33°C. The spa waters here are reputed for their properties in helping with rheumatism and various skin problems.

Rennes-les-Bains has also received a little recent notoriety as a result of Kate Mosse’s book ‘Sepulchre’ which was set in Rennes les Bains. 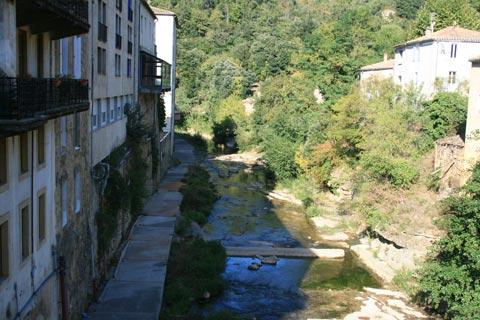 The town is a popular base with hikers exploring the surrounding hills or visiting the natural water sources. There are several sites of interest nearby, including the ruined abbey at Alet-les-Bains, the remains of castles at Arques Chateau and Coustaussa Chateau, and the picturesque Calamus Gorges to the south-east.

Rennes-les-Bains is in the heart of Cathar country and very close to Rennes-le-Chateau recently made very famous for its role in Dan Brown’s ‘The Da Vinci Code’. The famous cathar castles such as Chateau de Queribus and Chateau de Peyrepertuse, perched high on craggy hilltops,  are also within easy reach.

Map of Rennes-les-Bains and places nearby

Visit near Rennes-les-Bains with France This Way reviews

Plan your visit to Rennes-les-Bains, Aude