From the Pyrenees to Provence and from the Mediterranean to the mountains, Languedoc-Roussillon is surely the most varied region in France, with something for everyone whatever you are looking for and whatever the season!

The Languedoc-Roussillon region is in the south of France, along the Mediterranean coast between the French border with Spain and the west of Provence, and reaching inland to the Pyrenees in the south and the Cevennes National Park in the north. 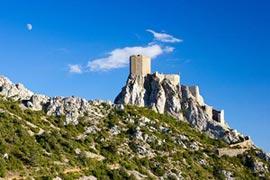 As a result of this geography and its interesting history Languedoc appeals to beach lovers and hill walkers, to enthusiasts of ancient monuments and to those who enjoy the tranquil countryside - in fact it appeals to pretty much everyone who chooses carefully where to stay!

Where to start? Languedoc-Roussillon divides naturally into three zones with different characteristics:

To help with your planning we have given a brief guide below to the highlights in each of the five French departments that make up the Languedoc-Roussillon region. You can also see the detailed travel guides for each department for lots more information and highlights to help you plan a successful visit.

Where to find a beach in Languedoc-Roussillon?

All departments except Lozere include some Mediterranean coastline and several popular coastal towns and beach resorts. Visitors to the coast often stay in the south, in the Aude or Pyrenees-Orientales departments.

See our separate guide to the beaches and resorts in Languedoc-Roussillon.

France This Way comment: We can't suggest a 'favourite' department because they are so different and it depends whether you are looking for beaches or scenery, historical monuments or vibrant cities, quaint villages or mountains. Our personal favourite destinations in Languedoc-Roussillon i.e. the ones we love to go back to, are the Gorges-du-Tarn and the resort of Collioure

Lozere, the most northern department in Languedoc, is best known for its dramatic and unspoiled scenery and for the opportunities for outdoor pursuits. One particular natural highlight is the Gorges du Tarn, very attractive gorges lined by cliffs and steep forested slopes.

Along the gorges there are also several towns and villages of interest such as Sainte-Chely-du-Tarn, the very picturesque village at Castelbouc, and Sainte-Enimie, classified as one of the 'most beautiful villages in France'.

The Gorges de la Jonte just to the south of the Gorges du Tarn are also very picturesque, and you will find various cave systems, rock formations and other natural spectacles close by when you visit.

In the centre of the Lozère department we particularly recommend you visit Florac, the main town in the Cevennes, and the lovely riverside village of Pont-de-Montvert. In the east of the department another of our favourite highlights is the remote unspoiled village of La-Garde-Guerin, also listed as one of the 'most beautiful villages in France'.

The most popular destination in the Gard department of Languedoc-Roussillon is undoubtedly Nimes, both for the town itself which is lively and attractive, and for its exceptional Roman ruins.

A trip to Nimes will usually be combined with a visit to the the nearby Pont du Gard aquaduct, an extraordinary Roman achievement and one of the most impressive Roman monuments in Europe.

In the countryside north of Nimes there are several places that are very picturesque including the attractive villages of La Roque-sur-Ceze and Aigueze, both listed among the 'most beautiful villages in France', and the medieval town of Uzes.

In southern Gard the seaside resort of Le Grau-du-Roi is popular with summertime visitors, and the nearby fortified town of Aigues-Mortes with its extensive historic centre is one of our favourite towns in the region.

The north-east of the Lozere department falls within the National Parc des Cevennes and has many scenic highlights such as the Cirque de Navacelles. Start exploring this region perhaps in the medieval centre of Le Vigan.

The coastline in Herault is quite different in character to the east and the west of the department. The western part is centred around the Etang de Thau, a large 'seawater lake' surrounded by several traditional fishing towns and villages such as Marseillan, Sete and Balaruc-le-Vieux and the resort of Palavas-les-Flots.

The eastern region has more traditional beach resorts such as Cap d'Agde (best known as a naturist resort) and the 1970's resort at La Grande-Motte, which deserves to be visited for its architecture even if you don't like seaside resorts.

Among the most important towns in Herault are Montpellier, a lively and cosmopolitan town which is unmissable if you are in the east of the department, and Beziers in a pretty riverside setting towards the west.

Even if you are spending a sunny week by the coast we highly recommend you also take a day trip or two to explore the north and west of Herault away from the coast to see the attractive scenery and some very picturesque villages.

Among these villages, Minerve (25 km NW of Narbonne), Sainte-Guilhem (20 km E of Lodeve) and Olargues (40 km NW of Béziers) are all classified as 'most beautiful villages in France'.

The Aude department stretches inland from the Mediterranean along the Aude river. The first destination for most visitors will be the exceptional fortified city of Carcassonne, certainly among the most interesting towns in France to visit with numerous historical monuments.

The ruined cathar castles such as those at Queribus and Peyrepertuse are another highlight of a visit to Aude, situated in remote locations on craggy mountain tops. You might like to also investigate the 'holy grail' mystery at nearby Rennes-le-Chateau. (See also cathar castles country).

Another scenic highlight is to follow the River Aude and its tributaries that have carved ravines and gorges in the landscape at the Gorges de l'Aude. The Canal du Midi also traverses the department and is popular with visitors enjoying a barge holiday in southern France. Castelnaudary is the most important port town on the canal.

Towards the coast you will certainly want to visit the lively town of Narbonne, and perhaps the impressive Fontfroide Abbey to the south-west of the town. On the coast itself there are several small resorts and beaches, with Leucate Plage among the most popular.

The most southern department in the Languedoc-Roussillon region, the Pyrenees-Orientales is ideal if you wish to combine a visit to the coast with excursions into the foothills of the Pyrenees, and has several impressive towns and villages as well as lovely scenery.

The coastal section of Pyrenees-Orientales includes some attractive old fishing villages and resorts (and some rather less attractive resorts), including Banyuls-sur-Mer, Argeles-sur-Mer and Cerbère, and nearby Elne is visited for its cathedral.

The highlight here on the coast is most certainly the town of Collioure which has a beach, a sea-front castle and an extensive old town with numerous pastel coloured houses and a wide choice of restaurants.

The region between Canigou and the coast south of Perpignan is one of hills and low mountains called the Albères and follows the French border with Spain. Among other highlights we suggest you visit the 'beautiful village' at Castelnou and the curious rock formation at Ille-sur-Tet.

As you travel further west you will see Mount Canigou which is visible from many parts of the Pyrenees-Orientales and is the main landmark of the department. There are two main valleys that cross this region following the Tech and Tet rivers, to the north and south of Canigou:

Map of Languedoc-Roussillon and places nearby