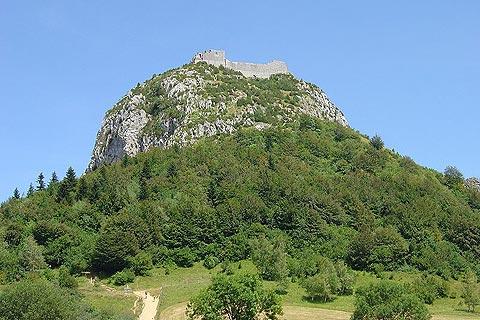 Montsegur and its castle are located in the Ariege department, in the southern Midi-Pyrenees region south-east of Foix.

The village itself is small, and usually visited for the castle: high on a rocky hilltop behind the village, the castle at Montsegur is an impressive sight. 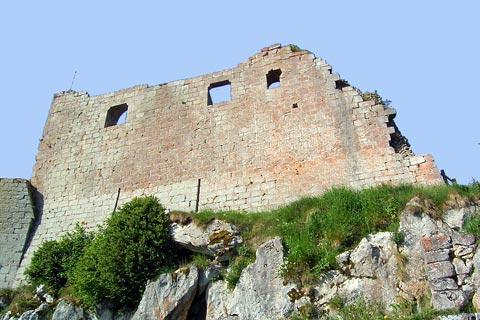 Three castles have existed at the same location in Montsegur

Although the castle is in ruins you can see substantial parts of the walls around the main castle courtyard as well as some remains of the original cathar dwellings just outside the castle walls. Apart from the interest of the castle itself, there are splendid views across the village of Montségur and the surrounding region from the top of the walls.

The most important day of the year for the Chateau at Montsegur is the summer solstice. On that day the rising sun passes through a series of arches, and has led to it being a major attraction, especially for enthusiasts of the cathars and their religion. This alignment with the sun is unlikely to be coincidence because a similar effect can be seen at Queribus castle.

Château de Montsegur is also sometimes associated with the story of the Holy Grail, although it should be remembered that the current castle contains essentially no vestiges of the two earlier castles on the same location. This possible association also led the castle to be of some interest to the Nazis during the Second World war.

In Montsegur village you can visit a small museum with various items from the history of the castle. 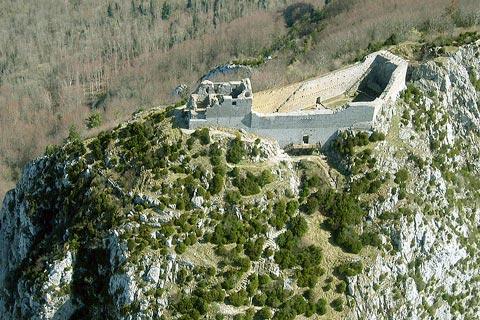 The most westerly of the cathar castles, the Château de Montsegur is only a short distance from Foix, an interesting town that is also overlooked by an impressive castle. The principal cathar castles such as Chateau de Queribus and Chateau Peyrepertuse are to the east of Montsegur in the Aude department.

Map of Montsegur and places nearby

Visit near Montsegur with France This Way reviews

Plan your visit to Montsegur, Ariege

The French version of this page is at Montsegur (Francais)