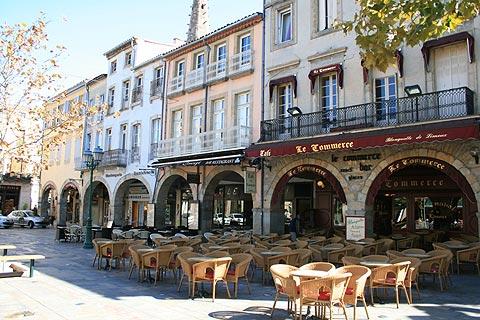 Limoux is on the Aude River in cathar country to the south-west of Carcassonne. It is a pleasant, unassuming French town, with little in the way of 'highlights' but worth an excursion if you are in the region.

Start your visit to Limoux in the historic centre, an attractive area around the Place de la Republique with some attractive 15th-16th century houses and other monuments. It’s a very pleasant spot to stop for lunch. 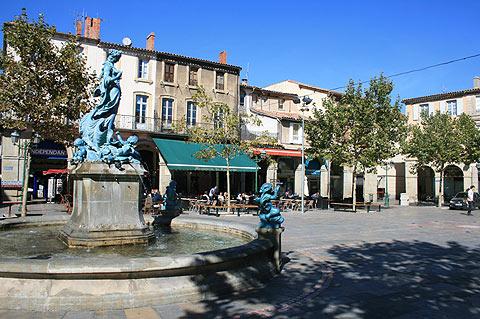 There is a covered market here in the Place de la Republique as well as an imposing fountain - and a selection of cafes and small shops. Elsewhere in the town centre you can see traces of the original fortified gateways into the town as well as a few medieval houses and renaissance period houses.

The Aude river is just behind the church. Here you can see the old bridge in Limoux with its passing places and six stone arches: this bridge dates from the 14th century and was originally fortified. Rather confusingly this is called the Pont Neuf (New Bridge) while the other bridge (the newer bridge) is called the Pont Vieux (Old Bridge) - this is because the Pont Vieux was originally the oldest of the two but was completely rebuilt in the 19th century.

There is a small museum in the town, the Museum Petiet, celebrating local painters, and a museum commemorating the role of the cathars in the region.

Market day in Limoux is Friday, and is the best day to visit.

If you visit between January and March you can enjoy the Carnival of Limoux, an ancient traditional carnival still pursued each weekend during those months with music and costumes. The carnival is the longest in the world and follows traditions dating back 400 years.

If you are in town during this period the different groups and bands play and parade at 11 o’clock, four-thirty and at 10 o’clock at night each weekend.

Limoux is best known for its sparkling wine, Blanquette de Limoux. This is reputed to be the oldest sparkling wine in France and dates back to 1531 when Benedictine monks from Saint Hilaire Abbey discovered that the wine they had laid down had fermented and formed bubbles.

This was the beginning of Limoux’s bubbly - the Blanquette de Limoux which was the first AOC to be created in the Languedoc area. The process (the locals say) was stolen by Dom Perignon who went on to create champagne. However the Limoux sparkling wine is a very high quality champagne substitute and Crémant, which was developed in 1990, has a top class reputation. You can (and should) buy a bottle in the town to try, it's good! 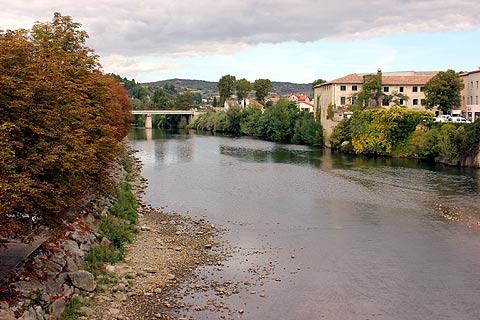 For garden lovers the Jardin aux Plantes Parfumées de la Bouichère is just on the edge of Limoux and specialises in fragrant plants. There are more than a thousand of them in the garden.

A short distance north of the town centre is the Basilica of Notre-Dame de Marcxeille, a 14th century church in the gothic style of architecture.

The fortified town of Carcassonne is of course an unmissable site when you are staying in the region near Limoux.

Map of Limoux and places nearby

Visit near Limoux with France This Way reviews

Limoux is classified as a recommended detour town (plus beau detour)

Plan your visit to Limoux, Aude

Regular market(s) are held in Limoux each Friday all day. (Markets are held in the morning unless stated.)

The French version of this page is at Limoux (Francais)