The Chateau de Foix stands in an imposing location on a rock above the town of Foix, in the Ariege department of south France.

France This Way comment: the castle adds a great deal of charm to the small town of Foix, and the views from the castle and the museum inside both add to the enjoyment of a visit

The chateau de Foix is situated high on a rocky spur above the town of Foix and the Ariège valley, and has a history dating from the 10th century although most of the castle we see during a visit was built in the 12th century. 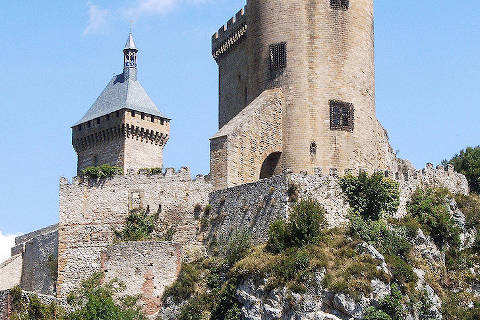 This location was chosen due to its important strategic position protecting the valley of the Ariege River that you can see behind the castle.

The two square towers, with the open protected area between them, date to the 12th century and fater. The round tower and the chapel were added in the 15th century. There is also an additional defensive wall around the entire castle.

Like many castles in the region, during the 12th century the chateau de Foix was occupied by the cathars, being pursued by the Albigensian crusade of Simon de Montfort. However because of the defensive position he failed to capture it despite laying siege to the castle on two separate occasions.

However, sixty years later the castle was successfully seized by King Philippe: the easiest way to capture a castle is always by betrayal rather than force, and this was how the castle was later captured.

Because it was built as a defensive fortress, the castle was less than ideal as a residence and in the 15th century, having occupied the castle for several centuries, the Counts de Foix largely chose to live in their nearby Governors palace in preference, although the castle continued to play an important role in defending the region until the end of the Wars of Religion.

The chateau de Foix continued to be used for important gatherings and receptions, and also as an army garrison, and as a resut it escaped the neglect that led to the ruin of many castles after the wars had finished. For almost a hundred years after the Revolution the castle continued to be used, this time as as a prison.

The chateau was extensively renovated in the 19th century and now contains the Ariége departmental musum, that explains the history of Foix and the department with artefacts from prehistory and the roman period as well as the cathar period and medieval town. 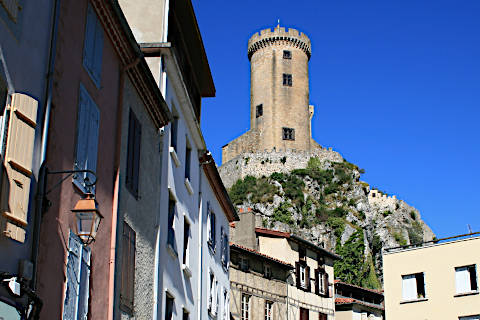 The town of Foix is interesting to explore, with several other historical buildings in the town centre. Another town that is pleasant to explore near Foix is Mirepoix, a traditional bastide town with a medieval centre, and visitors will also want to visit the cathar castle at Montsegur.

See more castles in France. You can find more travel ideas in the Ariege guide and the Midi-Pyrenees guide.

Map of Chateau de Foix and places nearby

Visit near Chateau de Foix with France This Way reviews