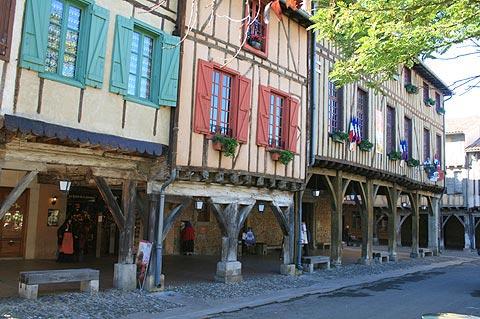 The Ariege Department of southern France is quite isolated and relatively unknown by visitors although it contains a great deal of very attractive scenery, especially in the south-east of the department where the landscape rises into the Pyrenees mountains, and several interesting medieval towns and villages. 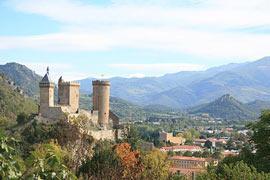 The Ariege department is situated in the south of France to the north of Andorra and the border with Spain. The town of Foix is the capital of the department, which can most easily be accessed from Toulouse to the north.

The principal appeal of the department to visitors is the scenery of forested hills and low mountains, and there are also several attractive small villages and towns with historic centres to explore.

For the purposes of a visit the Ariege can be seen as two regions: Foix and the east and the south-western region that falls within the Natural Regional Park of the Pyrenees-Ariegoises. Below we explore the highlights of each of these two regions.

Most visitors associate the fascinating history of the cathars, a religion that was persecuted to extinction by a religious crusade in the Middle Ages, with the Aude department to the east of here, but the cathars also sought refuge in the isolated castles of the Ariege department.

The best known of the cathar castles in Ariege are those at Roquefixade and Montsegur, each situated in the hills to the east of Foix in defensive positions with far-reaching views across the surrounding countryside and to the mountains beyond.

The town of Pamiers is the largest in the Ariege department and has a cathedral and several medieval towers to see, while Foix to the south is an attractive market town which is also overlooked by an imposing medieval castle.

To the east of Foix near the border with the Languedoc-Roussillon region we also suggest you visit the medieval town of Mirepoix and the fortified village of Camon, listed as one of the 'most beautiful villages in France'.

To the south of Montsegur you can visit the very pleasant spa town at Ax-Les-Thermes, also popular in the winter as part of the Ax-3-Domaines ski resort and a good base in the summer for exploring the region.

Close to Ax-les-Thermes in the Ariege you can explore some of the most beautiful scenery in the department in the Orlu Valley Natural Reserve. In the Orlu Valley there are also several picturesque small villages, an animal park, an observatory and the chance to see the Dent d'Orlu, an imposing granite summit which can be reached by footpath.

In the region of Foix and Tarascon there are several interesting cave systems that provide a nice way to escape from the summer sunshine for an afternoon.

Western Ariege and the Natural Regional Park of the Pyrenees-Ariegoises

The western region of the Ariege falls within the Natural Regional regional park of the Pyrenees-Ariegoises and includes beautiful scenery, typically of small hills and small forests with fast flowing streams in the valleys.

You can take a stroll along the riverside in the town of Saint-Girons, one of the largest in the region, then visit the nearby village of Saint-Lizier which has quite an extensive historic centre and is also listed among the 'most beautiful villages in France'.

Also very close to Saint-Girons the village of Montjoie-en-Couserans is very small but a good starting point to follow the scenic Tour de l'Avantes route to explore the local scenery and heritage.

Other villages which are very small but worth a look when you are passing include:

One of the most scenic highlights in this part of the Ariege is the Etang de Bethmale to the south-east of Castillon-de-Couserans, a very tranquil lake surrounded by trees and another lovely place for a picnic.

Map of Ariege and places nearby

See an index of all Ariege communes