The Château de Peyrepertuse is one of the famous 'cathar castles' of southern France, situated in Duilhac-sous-Peyrepertuse in the Aude department of the Languedoc-Roussillon region. The château is one of the five castles classed as the 'Cinq fils de Carcassonne' that formed a band of protection between France and Spain when the border was further north than it is today.

France This Way comment: one of the most visited and most dramatically situated of the cathar castles, and also the largest among them, although the ruins of the castle are not extensive it is a very pleasant excursion to visit the Chateau de Peyrepertuse

The castle is at the top of a steep rocky ridge, at almost 800 metres altitude. As well as the obvious defensive advantages of this position it also allowed a large amount of the surrounding region to be watched over and controlled.

The castle appears almost invisible at first, so closely it resembles the rock on which it is built and we can only wonder at the incredible feat it was to build a castle in such a location. 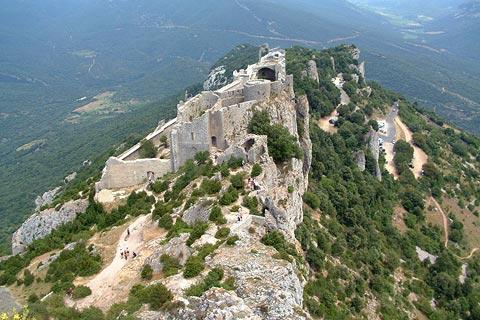 The site was occupied as early as 100 BC, with the Château de Peyrepertuse we see today itself dating from the 11th century. At the time of the Albigensian crusade against the cathars (from 1209-1229) the castle was owned by Guillaume de Peyrepertuse.

The castle was never actually besieged but was handed over to the crusade forces in 1217. It subsequently returned to the control of Guillaume de Peyrepertuse, who then refused to surrender to the crusaders so was excommunicated in 1224. The castle subsequently became the property of the French crown in 1240, after a revolt against the King and crusaders in Carcassonne had failed.

Shortly after, in 1242, the castle was substantially reinforced and extended due to its position on the frontier with Aragon and Spain to the south.

In 1258 the border between the two nations was fixed with the signing of the Treaty of Corbeil. This border was a short distance south of Peyrepertuse so the castle was used as one of the series of castles called the 'Sons of Carcassonne' that were fortified in order to protect the border.

This situation continued broadly unchanged until 1659 when the Treaty of the Pyrenees established the border with Spain further to the south, and the military need for Château de Peyrepertuse had passed. Unlike most of the Cathar castles, a small garrison of soldiers actually remained at Peyrepertuse until the French revolution in 1789, after which it was abandoned.

The castle now receives about 100 000 visitors a year, a quite remarkable number given its isolated position - but quite understandable when you see the castle which is in a very dramatic location high above the village of Duilhac. The access path from the car park follows up the slope and around the eastern end of the castle.

Although the castle is essentially in ruins there is plenty to see to evoque the original castle. The castle ruins extend over a length of almost 300 metres with most of the circumference being directly above steep cliffs. Substantial amounts of the walls and towers are still intact as are parts of the donjon, some of the rooms and the chapel.

The oldest part of Château de Peyrepertuse is the lower part and includes the church, some living accommodation and water cisterns.

The newer part, further to the west, was the part of the castle added after 1242 (hence it was not here at the time of the crusade against the cathars), and its position on a raised rocky section reached by a staircase cut into the rock means that this 'new' part could be defended even if the 'lower' castle was taken. This section also includes water cisterns and a chapel.

The most complete part of the castle is the lower part, but be sure to continue further along the rocky ledge, and higher, for the steep flight of rough steps that leads to the Saint George Keep - the part added after 1242 by Louis IX .

This is also the best place for views back over the main Peyrepertuse castle and the surrounding region, and also across to neighbouring Queribus castle. Of course, the views from the castle are also one of the principal highlights of a visit.

The Chateau de peyrepertuse is open all year except for January. Admission costs around 10 euros for an adult in July and August, 7 euros the rest of the year. 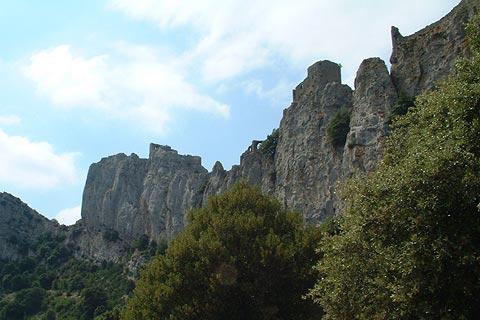 You will also enjoy a stroll around the village of Duilhac, and the shady valley that follows the Gorges du Verdouble makes a lovely scenic contrast to the hot hilltop castle.

Map of Chateau de Peyrepertuse and places nearby

Visit near Chateau de Peyrepertuse with France This Way reviews