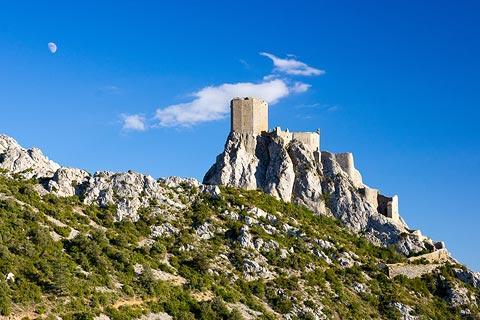 The 'cathar castles' is the name given to the 11th-12th century castles in the Languedoc-Roussillon and Midi-Pyrénées regions of France that were either owned by or gave shelter to members of the religious group known as the cathars during the crusade against the cathars led by Simon de Montfort for the Catholic Church under Pope Innocent IV in the years 1209-1229.

Five of the castles, known as 'the sons of Carcassonne', also had an important role in protecting the border with Spain from the 13th century to the 17th century. This role was lost following the Treaty of the Pyrenees (Traité des Pyrénées) in 1659 which established the border between France and Spain further to the south in the Pyrénées mountains, and the castles were largely abandoned from that time on.

Note that most of the defensive walls and buildings we see when we visit the castles today were built for the castle's later defensive role, so had not yet been built at the time of the cathars.

The Château de Peyrepertuse is the largest of the cathar castles and also the most visited. Although many of the internal buildings are now gone the walls, remaining buildings and location are more than sufficient to evoke the dramatic history of the location.

The Château de Quéribus is one of the most visited of the cathar castles, because of its accessibility, its dramatic location, its good state of preservation and the amazing views from the castle terrace.

The Château de Puilaurens is the most southerly of the cathar castles, and also one of the most dramatically situated being at almost 700 metres altitude and on a small narrow ridge with an almost sheer drop below.

The Château d'Aguilar is one of the smaller of the 'cathar castles' and at lower altitude than most but retains its double wall of defensive walls and has attractive views across the region.

The Château de Termes, now in ruins, was a formidable castle in the 12th century that resisted siege for several months in 1210 - one of the longest of the sieges in the Albigensian Crusade.

The five principal cathar castles above were later classified as 'the sons of Carcassonne' because from the 13th century until the 17th century they defended the border between France and Aragon. There are various other castles that are also considered to be cathar castles, having played some rôle in the cathar movement: Laurac, Fanjeaux, Mas-Saintes-Puelles, Lastours and Montségur.

The cathar castles most visited by tourists are Château Queribus and Château Peyrepertuse, not surprising given their condition, dramatic location and the fact they are close to each other.

- 1209-1229: The Albigensian Crusade (croisade des Albigeois). This crusade was led by Simon de Montfort for the Catholic Church under Pope Innocent IV to suppress the cathars and protect the position of the Catholic church

- 1240: An unsuccessful cathar siege of Carcassonne against the crown and crusaders

- 1258: The signing of the Treaty of Corbeil, fixing the border with Spain just south of the cathar castles and giving rise to the need for a string of fortified castles

- 1659: Signing of the Treaty of the Pyrenees, finalising the Spain-France border further south in the Pyrenees in its current position and making the border castles redundant

There are also further castles in the region whose link to the Cathar movement is less direct but are also promoted as cathar castles. These include: Château d'Arques, Durfort, Miglos, Miramont, Niort, Padern, Pieusse, Puivert, Roquefixade, Saissac, Usson and Villerouge-Termenès.