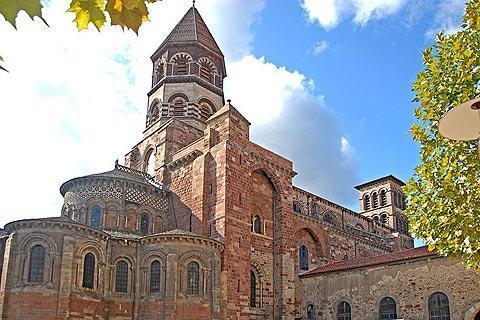 Brioude is a town in the Haute-Loire department, in the southern part of the Auvergne region and south-east of Issoire. The town is best known for its lovely roman style basilica.

Although it is the basilica in the town which attracts the majority of visitors it is well worth also allowing time for a stroll around the rest of the old town to see some of the other traces left by Brioude's long history, dating back to the town's role as an important pilgrimage center from the 9th century onwards.

Most visits to Brioude will start with the Basilica Saint-Julien, constructed during the 11th - 14th century and the largest roman style church in the Auvergne region which dominates the centre of the town. With a decorative tower at one end, an ornate roman style chevet at the other, and an octagonal tower in the middle it is also one of the most attractive of the Auvergne cathedrals and churches.

Note the use of both red and white stone to create patterns in the stonework, for example around the doorways, then inside the basilica the colourful 13th century frescoes are exceptional. Other points of interest include the ancient patterned paved floor and some modern stained glass windows.

Brioude tourist office on the corner of Place Lafayette can provide you with a map for a guided tour of the town that incorporates the most important manor houses, which is an interesting way to explore and of course also passes the other major Brioude landmarks.

The town of Brioude itself is calm and pleasant, especially in the narrow unspoiled streets around the Place Saint-Jean and the basilica. Several of these houses are quite grand and hint at how wealthy Brioude must have been in the past. Unusually for the region there is also a 16th century half-timbered house: the Maison de Mandrin on Rue de la Janivelle.

You will also find a couple of interesting art galleries and a selection of cafes in the village centre. In the Hotel de la Dentelle you can learn about the history of lacemaking in the region, with numerous examples of lace from the last 150 years.

The region along the river Allier is attractive to visit, and also offers various watersporting activities. If you cross the river at Vieille-Brioude using the old stone bridge you get a nice view across the valley.

Nearby attractions include the medieval village of Lamothe and also Lavaudieu, a classified 'most beautiful village in France' a little to the south-east of Brioude.

Map of Brioude and places nearby

Visit near Brioude with France This Way reviews

Plan your visit to Brioude, Haute-Loire

Regular market(s) are held in Brioude each Saturday. (Markets are held in the morning unless stated.)

The French version of this page is at Brioude (Francais)