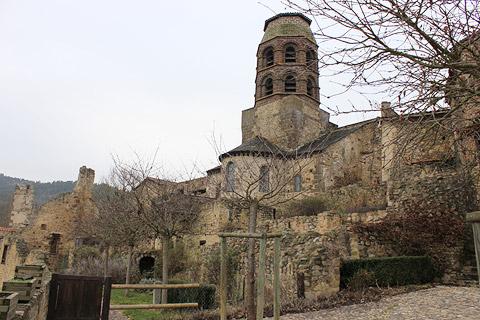 Lavaudieu is a small village seven kilomters south-east of Brioude, in the Haute-Loire department of the Auvergne region. In a pretty setting on the river Senouire, Lavaudieu is listed as one of the 'most beautiful villages of France'.

The village stands on the quiet river Sanouire river, and is clustered around the abbey, the principal attraction in the village. Lavaudieu itself is a pretty traditional village of the region, set in rolling countryside. 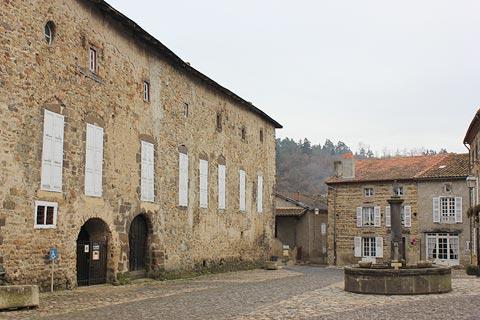 Stroll through the village streets, lined with stone houses and small gardens, and the main square with its 'obelisk-fountain' and then head down to the stone bridge for picturesque views along the river and to the abbey. The village has a great deal of charm and there are numerous small features to enjoy, such as ancient doors and windows, a stone archway and an old iron cross.

Just below the abbey there is a particularly pleasant spot where you can sit on the stone benches and admire the sight of the abbey and village above and the river below.

I was particularly impressed by the number and quality of the potagers (vegetable gardens) in the village. Every one was immaculately kept and still productive even though I was visiting in January! They must be fabulous in the spring/summer.

There is also a small museum in Lavaudieu, the 'museum of arts and popular traditions', which gives an insight into life in the Auvergne.

Dating from the 11th century, the benedictine Abbey de Lavaudieu is a good example of roman architecture in the Auvergne. The outside of the church is quite modest in design except for the arcaded octagonal belltower and typical of those in the region.

Inside the church there are a good number of frescoes painted in the early 14th century, and also intricate carvings on the capital stones. Take the time to look at the frescoes individually, they are of an unusually high standard and quality and combine religious images (such as crucifixion and angels) with more 'contemporary' images such as the arrival of black death in the village.

The other main highlight in the abbey is the roman style cloisters. The lovely cloister has two levels of arches with those on the ground floor in stone (alternating one decorative column then two simple columns, the columns ach having decorative capitals) while the upper storey is much simpler and supported by a wooden structure. 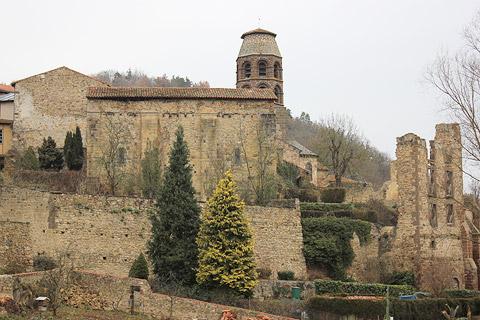 Just off from the cloisters is the refectory which contains the most important fresco in the abbey complex, a very large painting of Christ, with the apostles and the Virgin on the lower part of the picture. (The abbey was also renowned for a beautiful painted woodcarving of Christ, but this is now held in the Metropolitan Museum of Art in New York.)

Lavaudieu abbey is closed to the public from late autumn to late spring.

The attractive town of Brioude with its Roman Basilica is nearby, and the village of Auzon is one of several traditional villages to explore around Lavaudieu.

The gorges of the Allier river pass through this region of the Haute-Loire and have many scenic highlights.

Map of Lavaudieu and places nearby

Visit near Lavaudieu with France This Way reviews

Plan your visit to Lavaudieu, Haute-Loire

The French version of this page is at Lavaudieu (Francais)