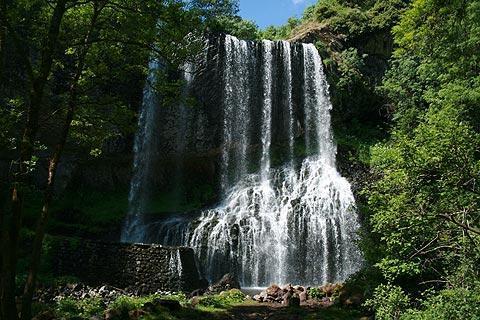 Named after the Loire river that crosses the department, the Haute-Loire department is best known for the very attractive pilgrimage town and historic monuments at Le Puy-en-Velay, but spend a while exploring and you will discover and enjoy many less visited and very attractive highlights in this picturesque department...

The Haute-Loire department is situated in the south-east of the Auvergne region, in the mountainous region of the Massif-Central. The department is crossed by both the Allier and Loire rivers, and many of the highlights are along the courses of these rivers.

The 'capital' of the Haute-Loire, and much the most visited destination for tourists, is the town of Le Puy en Velay, a fascinating town with a long history - and several important religious monuments - related to the medieval pilgrim path that starts from the town and leads to Santiago de Compostela in Spain (the 'Via Podiensis').

However we recommend you also take the time to explore the rest of the department!

Note: we often recommend small villages as being traditional of the region but be aware that these are typically very small and you will find others just as picturesque elsewhere in the department - so while they are attractive I wouldn't drive all day to get to them, but explore closer to home if you are staying a long way away!

The town and basilica at Brioude and the classified beautiful village at Lavaudieu are in the north-west of the department, as is the pretty village of Blesle.

The substantial benedictine Abbey at La Chaise-Dieu to the north-east has various impressive features, principal among them the 26 metre long 15th century fresco 'Danse Macabre'. La Chaise-Dieu falls within the attractive scenery of the rolling hills of the Regional Natural Park of Livradois-Forez.

To the south of here, the 14th century chateau and imposing towers of Chateau de Chavaniac (now a local museum) benefits from a locally warm climate to also have impressive gardens, and you will also come across other castles as you explore such as those at Paulhac (now restored) and Domeyrat (in ruins).

West of Le Puy the villages of interest include Saint-Privat d'Allier, on a stony ridge and dominated by its castle, and Chanteuges with a small abbey and views across the valley below.

South of Le Puy en Velay the plateau rises to around 1350 metres between the River Loire, here a fairly gentle stream, and the Allier.

At this point the Allier river is a broad mountain stream which flows deep, green and crystal clear from the Cevennes and passes through the impressive Allier Gorges.

A signposted tourist route also follows the gorges through very peaceful and attractive countryside that continues until you reach Lavoute-Chilhac, on a loop in the river crossed by a 15th century bridge and dominated by a large priory.

The gorges are an important tourist destination in Haute-Loire - see Gorges of the Allier for more information.

A short distance east of Le-Puy-en-Velay the chateau at Polignac stands on a great rock in what must be one of the best 'naturally defended' positions possible, while a little way south the Abbey at Solignac is a good example of roman style architecture and features impressive carvings.

Visit the summit of Mont Mezenc on the border with Ardeche (the mountain has two summits - one in Haute-Loire and one in Ardeche) for a particularly far-reaching view across the region.

To the far north we came across a village called Saint-Pal-de-Chalencon which was quite small but had an interesting historic centre to explore. Chalencon village is also recommended, with a string of houses along a ridge between an ancient bridge and the ruins of a medieval castle.

Two villages in the south-east Haute-Loire are listed among the 'most beautiful villages in France': at Arlempdes on the Loire, music and theatrical manifestations are held in the castle every summer, while Pradelles is also a small, historic and picturesque town perched high above the valley.

The castle at Arlempdes is the very first castle on the Loire river, starting from its source. Of course there are many others further along the river including many of the most famous castles in France such as Villandry and Chambord (see Loire Valley castles).

The walk around the lake at Bouchet (west of Arlempdes) has also been recommended to us - the lake is in the crater of an extinct volcano and surrounded by forests, while further west the small village at Moudeyres is also very charming and unspoiled.

The region to the east of Le Puy-en-Velay is rich in traditional villages that are worth exploring such as Bigorre, Chaudeyrolles, Les Estables and Saint-Julien-Chapteuil with a notable roman style church.

Map of Haute-Loire and places nearby

See an index to all Haute-Loire places