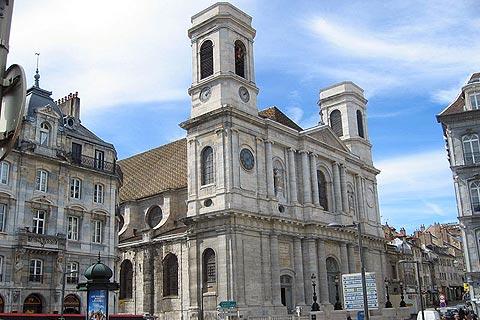 The town of Besançon is situated in the Doubs department, in the Franche-Comté region of eastern France. Wrapped in a loop of the River Doubs, Besançon is surrounded by attractive forested countryside and low lying mountains.

Besancon is also a university town and has a modern and vibrant centre as well as important annual festivals such as the Festival of Classical Music and the Festival of Jazz.

France This Way comment: the town has lots of little features such as a Roman arch, fountains, several churches and fortified towers that together with its citadel make Besançon quite an interesting town to explore, and are the reason that Besançon has been classified as both a protected Historic French town and as a French Town of Art and History.

Start your visit to Besancon at the 'Battant' bridge, a bridge with five arches that has stood here since Roman times, when it was built along the road that connected Italy with the Province of the Rhine and with Vesontio.. The middle arch has a span of thirteen meters. The Quai Vauban is a very long stretch of charming 18th century houses along the side of the Doubs river and ideal for a promenade as well as being very close to the town centre.

Now take the Grand Rue to the Place de la Revolution where you can visit the Besancon Musée de Beaux Arts, which has a distinctive collection of paintings from the 15th to the 20th centuries, with some extraordinary works by Bellini, Goya, Rubens, Matisse, Rodin... 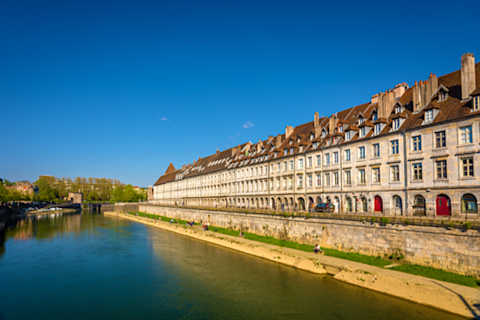 The historic centre of Besançon has many palaces and townhouses, typically built around the sixteenth century. Perhaps the most imposing is the Granvelle Palace, built in the first half of 16th century, with a Renaissance façade: the entrance is a massive arch between two pillars, adorned with many decorations (angels, flowers and dolphins) and an elegant arcade inside the courtyard.

Another building of great importance is the Cathedral of Besançon, above all for the interior with its architectural and artistic value. Dedicated to St. John the Evangelist, the cathedral has a nave and two impressive aisles (26 meters in height). The cathedral dates from the beginning of the 13th century but it was rebuilt after a fire in 1237.

Inside the cathedral, highlights include the finely painted apse with paintings by Charles Vanloo, Charles Notoire and the 'Death of Sapphira and Ananias' by Tintoretto.

Next to the cathedral you can see the famous “Astronomique Horloge” (1860), indicating not only the hours but also the seasons, tides and movements of the planets (you can also visit the nearby “Museum of Time”). With a myriad of dials (57 apparently) and 30 000 parts it is one of the 'great clocks of the world' and is also a listed National Monument in France.

Another interesting artefact is the Porte Noire, a triumphal arch once called the Gate of Mars and then later the 'Porta Nigra' (Black Gate). The arch has a height ranging from 12 to 36 meters and was built as a monument commemorating the battles fought in Gaul by the Romans and their allies, the Sequani - some scenes of the battles can be seen in the reliefs on the arch.

As you explore you will also discover the Church of Saint-Madeleine, the birthplace of Victor Hugo, museums and parks and many other sites of interest. After exploring the historic centre of Besancon you can make the (steep path) climb up to the Citadelle, to visit the citadel and also to enjoy impressive views across the town...

The famous citadel fortified by Vauban that dominates Besancon is an imposing structure with three surrounding walls and some wells that reach a depth of one hundred meters deep with a width of about four meters.

The Citadel of Besançon, a UNESCO World Heritage site and Historic Monument of France, is one of the top tourist destinations in the Franche-Comté region, with more than a quarter million visitors annually. Among the largest and finest military fortifications in Europe, it was designed and built by Sébastien de Vauban between 1668 and 1711 and the fortress crowns Mount Saint-Étienne, 350 feet above the old city and the buckle of the river Doubs.

As well as touring the fortifications and walking its ramparts, there are several attractions within the citadel walls. These include:

- the Natural History Museum and zoo (with Siberian tigers among the animals to be sen), an insectarium (the largest of its kind in France), an aquarium with native fish species, vivariums, a noctarium, a climatorium, and botanical and children's gardens ;

- the Musée Comtois, on three floors, which holds numerous fascinating cultural exhibits about the the daily lives of the people in this region from the 18th to early 20th centuries - including a puppet theatre;

- Space Vauban - a permanent exhibit about the history of the architect and the fortifications ;

- The Museum of Resistance and Deportation with 20 rooms of exhibits, photographs, documents, and art displays related to the French Resistance and the thousands of citizens deported to concentration camps in World War II. 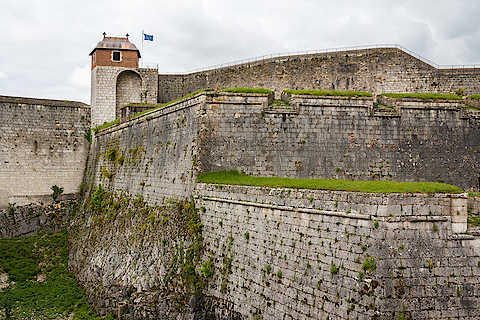 Three other fortifications overlook Besançon on nearby hills, including Fort Griffon designed by Jean Griffoni in 1595 and expanded by Vauban, which was certified by UNESCO with the Citadel, and is worth a visit. More information (in English) is available at : http://www.citadelle.com/en/

The Museum of Comtois Houses (Musée des Maisons Comtois) is fascinating outdoor museum of regional architecture with a dozen historical homes and additional out buildings, set in a beautiful rural setting. The site includes a boutique, café, and charming restaurant open May through August. The museum is located in Nancray, only 16 kilometres northeast of Besançon.

The region around Besançon offers interesting natural excursions on the Doubs river, to the source of the Loue river, or in the forest 'de la Joux'. Nearby the chateau at Moncley, north-west of the town, merits a detour.

Map of Besancon and places nearby

Visit near Besancon with France This Way reviews

Plan your visit to Besancon, Doubs

Regular market(s) are held in Besancon each Wednesday & Tuesday & Thursday all day & Sunday & Saturday & Friday. (Markets are held in the morning unless stated.)

The French version of this page is at Besancon (Francais)