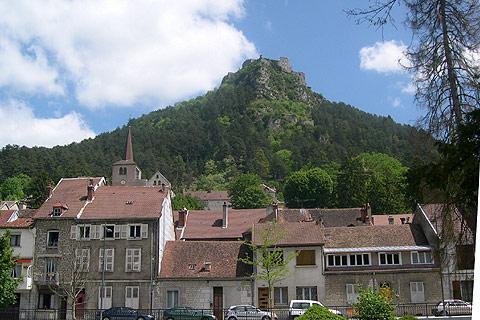 Salins-les-Bains is found south-west of Besancon in the Franche-Comte region of France, near Arbois. A spa town and salt producing centre in the Jura, it is at the bottom of a deep valley through which the River Furieuse flows.

The town is overlooked by two forts that were built due to the valley position of the town which was once a key strategic spot on the road to Switzerland.

Salins-les-Bains is best known for its historic salt mines*.  Salt extraction here finally stopped in 1962 and the old workings are now open to the public and a good place to start your visit. It is also here in an new industrial style building that you can find the Salins-de-Bains tourist office.

The remaining industrial buildings cover a large area in the centre of the town, although only about 20% of the original buildings still remain today, and several of the monuments in the town centre started life as part of the complex of buildings producing salt, including the gatehouse.

You can see the vast workings of the underground chambers dating back to the 13th century and now a UNESCO world heritage site, and various equipments associated with its extraction can be seen in the associated Salt Museum. 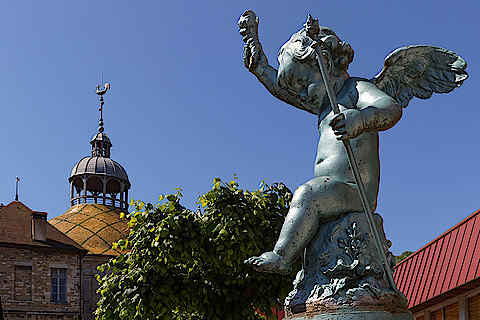 * It is hard for us now to imagine how important and valuable salt was a few centuries ago, when it was crucial for much food preservation, and by the 17th century it was one of the most sought after products available. Control over the production of this valuable commodity made the local Chalon family very rich and powerful.

In Salins-les-Bains town there are also some buildings of interest, such as the classical style 18th century Town Hall, which unusually also has prison cells because the town hall was also the local court.

Take a stroll along the Rue de la Republique for more neo-classical architecture (the street was rebuilt in the early 19th century after a fire destroyed the previous buildings), then perhaps visit the apothecary in the 17th century Hotel-Dieu to see numerous pottery items from the same period.

The most important church in Salins-les-Bains is the Collegiale Saint-Anatoile. The gothic style church dates from the 13th century and has a very unusual facade with ornate windows either side of the entrance, and a clocktower that was once a defensive watchtower.

The Chapel of Notre-Dame Liberatrice behind the Town Hall is noteworthy for its unusual roof design that incorporates a dome and a lantern tower.

After exploring the salt mines and town be sure to visit the two forts above the town: the Fort St André, reinforced by the renowned French military engineer Vauban, and the 19th century Fort Belin with a lovely view across the town below. 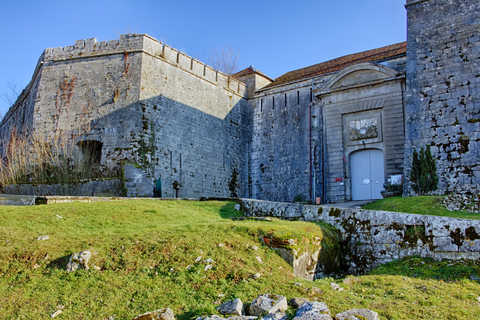 To the east of the town, in a lovely verdant spot, the river Lison emerges as a waterfall from the bottom of a cliff.

About 20 kilometres away at Arc-en-Senans the Royal Saltworks was a 'model village and industrial base' established in the 18th century to extract salt from the water from Salins-les-Bains and is also now a UNESCO listed heritage site.

Map of Salins-les-Bains and places nearby

Visit near Salins-les-Bains with France This Way reviews

Plan your visit to Salins-les-Bains, Jura