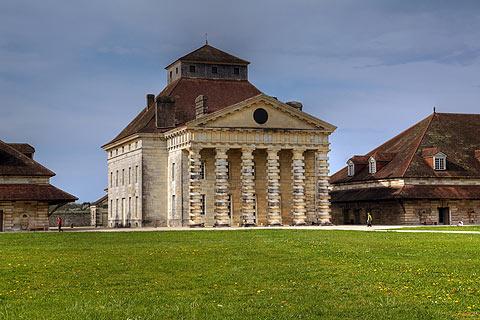 At this time salt was a very important commodity used for example in food storage, agriculture and glass production and medecine, and its production was a key industry in France. The building project was in part funded by a salt-tax that was added to the price of all salt sold in France, a tax that was extremely unpopular.

The general principal was that salty water was sent to the Royal Saltworks from Salins-les-Bains, 20 kilometres away. The water was then evaporated, first in a large pool (no longer in existence) and then in large pans heated by burning wood from the surrounding forest, and the remaining salt collected. 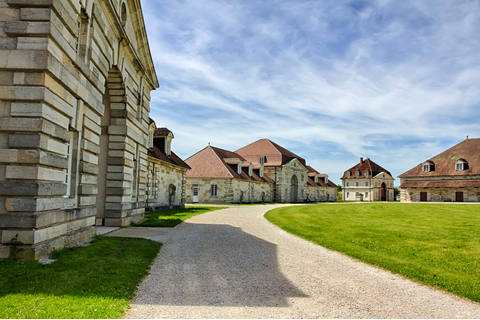 Salt continued to be manufactured at the Royal Salworks of Arc-et-Senans until 1895, then the site fell to ruin until 1927 when it was bought by the local department. Several phases of reconstruction and renovation followed.

According to the designer, Claude-Nicolas Ledou, by having the workers living on site they would avoid the 'distractions' that might otherwise reduce their efficiency. Some of the buildings follow a simple classical, columned, design while others are more basic.

The welcoming appearance on the outside contrasts with the conditions in the buildings in which the workers actually prepared the salt. Within the directors house at the Royal Saltworks there is a large exhibition dedicated to explaining the history of the production and use of salt, from where it comes from to why it was always so important for world trade.

The buildings are surrounded by an extensive and very attractive series of gardens, and the whole site is listed as a UNESCO World Heritage Site.

Unusually for a UNESCO site, the Royal Saltworks of Arc-et-Senans is also open as a chambre d'hote: we have not yet had the chance to stay their ourselves but guests can stay in the buildings and see the nighttime illumination of the monuments and gardens. See accommodation at the Royal Saltworks for details. 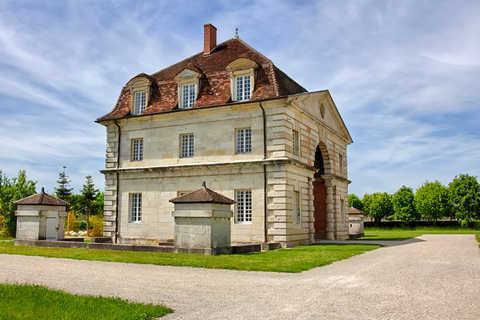 A visit to the Royal Saltworks can be combined with a visit to Salins-les-Bains, where the salt mines can be visited.

Map of Saltworks of Arc-et-Senans and places nearby

Plan your visit to Saltworks of Arc-et-Senans, Doubs