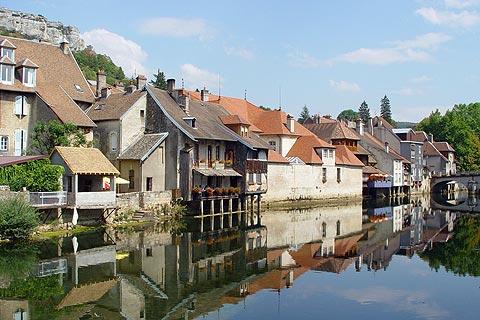 The village of Ornans is found south-east of Besancon in the Doubs department (Franche-Comte region) of France and below the Roche du Mont.

France This Way comment: this pretty riverside town is a practical centre for exploring the region and the pretty Loue River valley to the south-east of here.

Most visits will start next to the river: the picturesque houses along the river banks overhanging the mirror-surfaced river are the main highlight in Ornans. The best view is from one of the two 17th century stone bridges in the town. 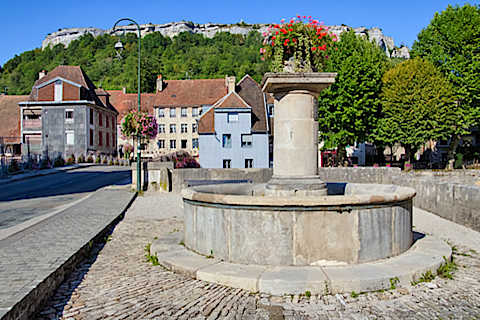 There are several other sights of interest in Ornans as you explore including the 16th century Church of Saint-Laurent, built on the site of an earlier church. The bottom part of the belltower is original and in the roman style, while the remainder of the tower was added later, and the porch section around the tower was not added until the 17th century. Inside the church is furnished with paintings, candelabra and other 17th century furniture.

Other notable highlights in Ornans include both the current Town Hall with arcades below and the original 15th century Town Hall (now called the Hotel de Grospian), a very attractive stone building.

Courbet, the French pre-impressionist painter, was born in Ornans and painted many pictures in the local vicinity. His house is now a museum containing a good number of works by the artist. The grave of Courbet is in the town cemetery.

No visit to Ornans would be complete without climbing the hill behind the town (the Roche du Mont) for a scenic view across the town, river and surrounding forested hills. On one end of the Roche du Mont you can see the remains of the Chateau d'Ornans: this was an imposing castle in the 13th century but now little remains of the castle except some sections of wall and a chapel. 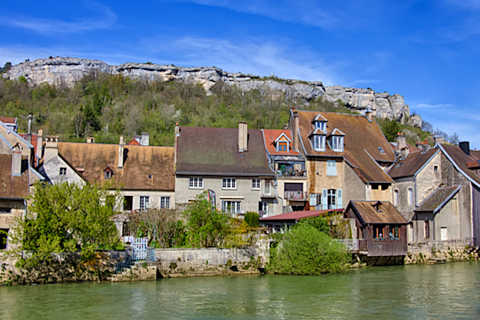 Ornans Tourist Office is on Rue Pierre Vernier near the town hall and can suggest walks in the region around Ornans.

The Chateau Cléron to the south-west of Ornans is an attractive castle, and just one of the attractions along the scenic River Loue Valley. Another particular highlight is the village of Lods, classified as one of the most beautiful villages in France.

Map of Ornans and places nearby

Visit near Ornans with France This Way reviews

Plan your visit to Ornans, Doubs

The French version of this page is at Ornans (Francais)