Between France and Switzerland, between plains and mountains, Franche-Comté has some interesting towns and villages - and some impressive scenery with vineyards and lakes, forests and mountains, as scenic backdrop 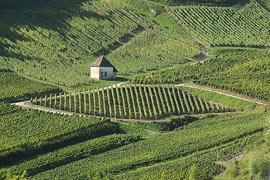 The Franche-Comte region of France (now part of the Bourgogne-Franche-Comté region) is found to the east of France and borders onto Switzerland. As you cross Franche-Comté towards the east you leave the rolling countryside and smaller peaks of the Jura mountains, cross the high plateaux, and enter the Alps.

Much of the countryside in the region is an unspoiled mix of forests and open country, interspersed with lakes and rivers, and it is for 'the great outdoors' that most visitors come to the region. Particular natural highlights of interest to visitors include the Parc Regional du Haut-Jura and the valley of the Loue River that passes through the Doubs and Jura departments.

There are four French departments in Franche-Comté: Haute-Saone to the north, Territoire-de-Belfort in the north-east, Doubs in the centre of the region and Jura to the south.

The most important town here is Belfort, overlooked by the massive walls of its fortified citadel. The Chapelle de Notre-Dame-du-Haut at Ronchamp, 20 kilometres north-west of Belfort, is one of Le Corbusiers most famous buildings and a big attraction for his followers - this world famous chapel was designed by Le Corbusier to replace an earlier church that had been destroyed.

The capital of the Haute-Saone department, Vesoul, has an interesting historic centre and easy access to the popular Jura scenic attractions. In this part of Haute-Saone you can also visit the town of Gray, and Luxeuil-les-Bains, best known for its impressive 13th century basilica.

In the far south-west of Haute-Saone a trip to the beautiful village of Pesmes is recommended.

There is a great deal to discover in Besancon, including a cathedral and an impressive Museum of Fine Arts.

South of here you can visit the village at Ornans and the Chateau de Cleron: the view of the houses along the riverfront in Ornans is one of the highlights of a visit to Doubs.

Travelling south through Doubs you can visit Lods, a small village in an idyllic riverside location that is classified among the most beautiful villages in France, and Mouthier-Haute-Pierre. You will also want to see the scenic highlights, walks and picnic spots along the pretty Loue River Valley, a scenic attraction in this area.

The Royal saltworks of Arc-et-Senans is a fascinating 19th century industrial complex restored as an attraction to the west of Doubs.

In the north-east you can visit Montbeliard, an interesting town dominated by a large castle on a clifftop above the town centre, and the towns of Baume-les-Dames and Saint-Hippolyte.

Close to the southern limit of Doubs, the historical border town of Pontarlier is at high altitude on the edge of the Jura mountain range and near the border with Switzerland, with the Chateau de Joux nearby.

Dole is an attractive riverside town in the Jura department of the Franche-Comte region, dominated by an imposing Collegiale Church.

Explore the cluster of towns around Arbois, a quiet town typical of the Jura that was once home to the laboratory of Louis Pasteur, such as Poligny and Moirans-en-Montagne, best known for its toy museum. At Salins-les-Bains you have a fascinating glimpse into the historically important salt industry.

The bustling town of Lons-le-Saunier in the southern part of the department is home to the oldest dinosaur skeleton in France, and two of the 'most beautiful villages in France' can be seen nearby: the pretty village of Baume-les-Messieurs is in a stunning location dominated by a large abbey complex and Chateau-Chalon is also in an impressive raised position overlooking the Jura countryside.

Map of Franche-Comte and places nearby