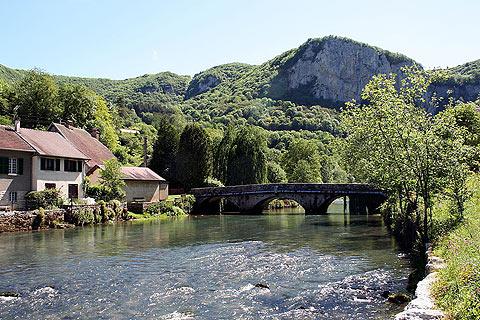 The small village of Mouthier-Haute Pierre, in the Doubs department of France not far from Lods and Ornans, is in a valley surrounded by steep forested hills and cliffs that reach almost 1000 metres altitude. The village is best known for its proximity to the source of the Loue River and the Gorges de Nouialles, but the village itself is very charming and also merits to be explored.

In the lower part of the valley you will see many of the cherry trees for which the village is well known, and from which a regional kirsch is produced.

Although there is not a Tourist Office in the village (the nearest is in Ornans) you will find all the information you need for exploring on a sign in front of the Mairie in Mouthier-Haute-Pierre. There are lots of marked trails and mountain bike routes through the surrounding countryside. 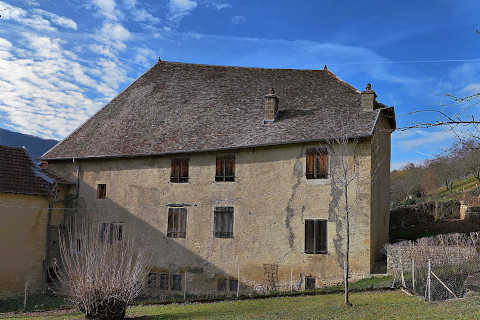 Throughout the village you will enjoy wandering along the narrow streets admiring the ancient houses, much as they must have been when they were built from the 16th century onwards. You will also see interesting features such as numerous fountains, small statues in niches in the walls and decorative stonework on the houses.

Within the village there are two religious monuments that are the principal sites of historical interest: the Church of Saint-Pierre and the Priory of Mouthier-Haute-Pierre, dating from the 13th century and renovated in the 16th century. Although the ancient priory is unfortunately not open to the public you can see most of the outside from the street.

The Church of Saint-Pierre is next to the priory and dates from the 14th century and was substantially increased in size in the second half of the 16th century. This expansion includes the belltower that dominates the church and features various heads carved in stone. Inside the church is also intersting with several notable features including the altar, and various paintings and statues.

Continue towards the west of the village to see the statue of Saint Foy on a large stone pyramid. 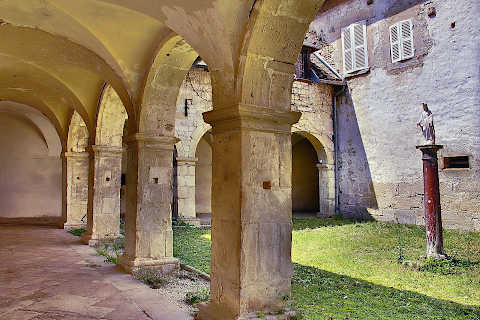 The main attractions for visitors to Mouthier-Haute-Pierre are scenic highlights outside the village. The most visited of these is the source of the Loue river as it emerges from a large cave in a scenic setting at the bottom of a cliff. Follow the river to the small village of Ouhans then follow the signs. (The Loue River is actually a part of the Doubs river that separates from the main river further upstream and travels several kilometres underground.)

Between the source of the Loue river and Mouthier-Haute-Pierre you can explore the spectacular scenery of the Gorges de Nouailles, while another popular trip takes you to the top of the cliff called the Roche de Hautepierre for exceptional views across the region. The Roche de Hautepierre is also a base for rock-climbing and hang-gliding.

Many visitors to Mouthier-Haute-Pierre enjoy hiring a canoe to explore the river further, and also close by there is a cave that was apparently an important Bronze Age settlement at the 'Grotte des Faux-Monnayeurs', and yet another natural highlight here is the lovely Syratu waterfall as it cascades across rocks in the forest.

Map of Mouthier-Haute-Pierre and places nearby

Visit near Mouthier-Haute-Pierre with France This Way reviews

Plan your visit to Mouthier-Haute-Pierre, Doubs