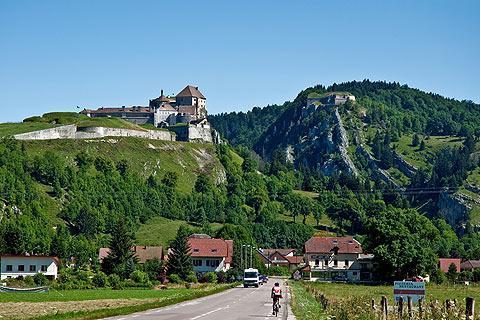 Close to Pontarlier at La Cluse-et-Mijoux in the Doubs department, the Chateau de Joux is one of the most impressive and interesting castles to visit in the Franche-Comté region. The chateau is also known as the Fort de Joux.

The first thing you will notice as you approach the Chateau de Joux is the impressive position of the castle, high on a rock promontory above the 'Cluse de Pontarlier' and with 100 metre high cliffs to the side - it is no surprise why the location was chosen to built a castle to be defended!

The valley below the castle has long been part of important trade routes across France that crossed the Jura mountain, hence the need to defend the valley (although Franche-Comté only became part of France in 1674 the trade routes existed long before that).

As if the cliffs were not enough, the castle has several rings of fortified walls around it, the result of numerous reinforcement projects over the course of the last 1000 years. 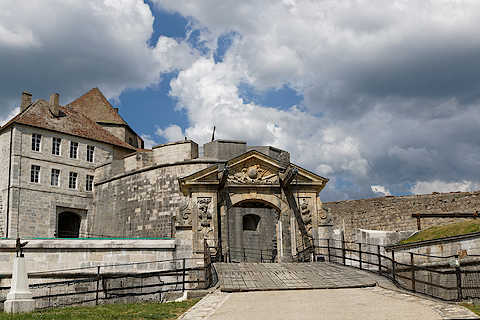 The early history of the castle starts around the year 1000 when the first castle was built here to enforce toll charges on the trade route. This role continued for around 300 years, during which time the castle was substantially reinforced.

After a period of decline, the castle regained new importance in the middle of the 15th century when it became part of the eastern defences of the Burgundy region. Later it passed to the Habsburg Empire and then to the Spanish in 1530. This period of Spanish control lasted around 150 years and was the time of greatest wealth for the Chateau de Joux.

Under King Louis XIV of France, in 1678 the Franche-Comté region and therefore the castle as well, finally came under French control. The famous French military engineer Vauban was called upon to increase and modernise the fortifications.

The castle remained an active military base (although it was not attacked during this period, and it is said that balls were even held at the castle) until the middle of the 18th century when it was transformed into a notorious prison.

The Chateau was to see military action once more at the time of Napoleon's retreat from eastern Europe when in 1814 it was besieged and taken by the Austrians, with significant amount of damage to the castle taking place at this time. It also played a role in slowing the invasion of the Germans passed the Maginot Line in the Second World War.

In 1958 the castle had lost any military use and was sold to the tourist office and opened to the public shorly after.

Each of these periods of history have left their traces to be discovered in the castle, which has also been renovated in recent decades, and there is a great deal to see from the castle's 1000 years of development. The entrance price is around 7 euros per adult and lasts just over an hour.

Unfortunately visits are only on guided tour, and in French, although written translations and audio-guides are also available in other languages. The tour is very interesting with lots to see including the defensive walls, courtyards, various rooms, a beautiful stone spiral staircase and several other staircases, the main castle keep, medieval toilets and a very deep well. The visit was excellent value for money and even the children were entertained! 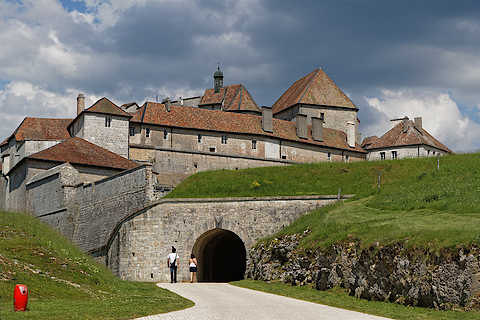 Also at the Fort de Joux (as part of the tour price) you can visit the extensive collection of the Museum of Arms. The Museum has a very extensive collection that covers the period from the 17th century onwards, including items from the Revolutionary period, the Napoleonic era and the France-Germany war of 1870.

A short distance north of here you can visit the town of Pontarlier, and if you continue in the same direction from the Chateau de Joux you can visit Mouthier-Haute-Pierre and explore the Loue River Valley.

See more castles in France. You can find more travel ideas in the Doubs guide and the Franche-Comte guide.

Map of Chateau de Joux and places nearby

Visit near Chateau de Joux with France This Way reviews