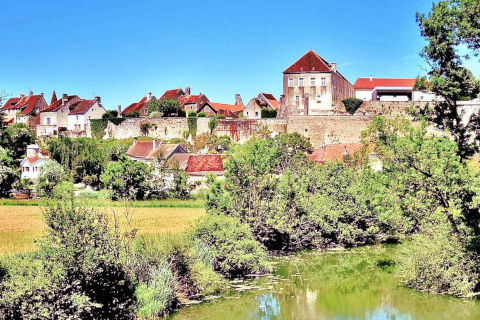 The village of Pesmes is situated about 25 kilometres north of Dole and to the west of Besancon, in the countryside of the France-Comté region. On the banks of the river Ognon, Pesmes is listed among the 'most beautiful villages in France'.

Pesmes has had an active history, belonging at various times to the Francs, the Spanish, and the Dukes of Burgundy, before becoming part of France in 1678.

France This Way comment: Pesmes is a charming village which certainly merits its 'most beautiful village' listing: the situation on the river, the historic village and the castle that overlooks this scene combine to make a visit very enjoyable 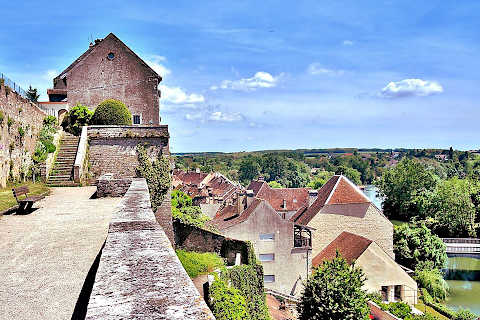 There are several historical monuments to enjoy here, most of them situated between the castle that overlooks the river, on the esplanade des Promenades behind the castle, and along the Rue du Donjon: in any case, the village is quite small and easy to explore.

Among the historic monuments of interest is the 12th century Church of Saint-Hilaire at the other end of Grande Rue towards the west of Pesmes which is notable for its belltower with a decoratively coloured roof (added in the 18th century after a fire), while inside you can see the 16th century statues of a mausoleum to local dignitaries Jean and Pierre d'Andelot and other decorative chapels.

In the centre of Pesmes you can see the substantial ramparts and the remains of the medieval castle, two of the original stone gateways into the town and grand townhouses such as the Maison Royale, the Maison Grandvelle, Hotel Mairot and the Hotel Chateaurouillaud.

Of course you will also want to explore the side streets of Pesmes that lead off these main routes: there are numerous smaller houses, and lots of smaller architectural features such as small towers, washhouses, fountains and decorative stone door and window surrounds that bear witness to the long history of the village.

Several of the most interesting sites are rather hidden away so we suggest you ask for the village map from the Pesmes Tourist Office to make sure you don't miss anything.

Unusually - and it's no criticism of the village itself - your memories of Pesmes will perhaps be from outside the village! The view from the other side of the river, of the 16th century houses and the castle on the hill, is undoubtedly among the highlights of your visit to Pesmes, so be sure to cross the bridge and follow the river banks a little way in either direction. 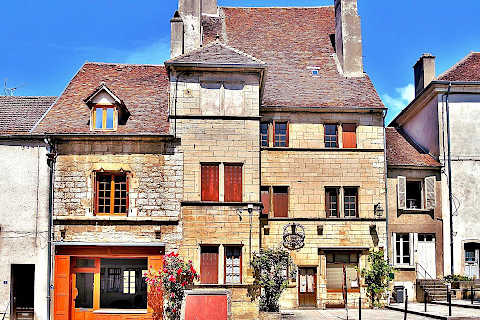 Photos 1 2 3 by Espirat are copyright

The Pesmes Forges on the river at the eastern end of the village date from the 17th century and were once an important producer of weapons. The forges continued to operate until almost the end of the 20th century, although by that time they were producing smaller implements like garden tools instead of weapons. The group of buildings that constitutes the forges now contain a small museum.

It is also possible to hire a boat to take a trip along the peaceful Ognon River from Pesmes.

Map of Pesmes and places nearby

Visit near Pesmes with France This Way reviews

The French version of this page is at Pesmes (Francais)