The town of Meaux is on the banks of the Marne river, in the Seine-et-Marne department of France and about 60 kilometres to the east of Paris, in the direction of Reims. It is the biggest town in the department (although not the prefecture / capital of Seine-et-Marne.

Meaux is best known, in France at least, for the famous brie cheese that comes from this region and called Brie de Meaux

France This Way comment: although the town is now rather extended with more recent development, in Meaux historic centre there are several imposing buildings, including the episcopal palace and gardens, the cathedral and the old chapter house, which together ensure that Meaux is an interesting destination to visit 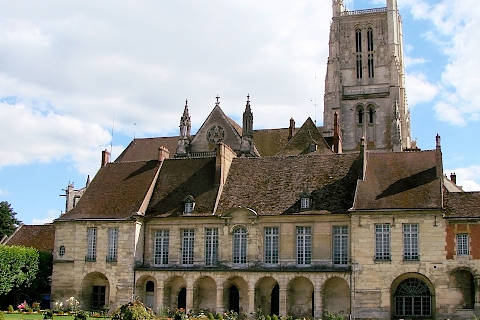 The most important buildings are all close together in the region known as the "episcopal cité" and include:

As well as the name of the museum, you will see several mentions of Jacques-Bénigne Bossuet in Meaux, such as the statue inside the cathedral. He was a well known writer and orator in the 17th century, and was also bishop of Meaux.

The Meaux tourist office is also near the front of the cathedral on Place Charles de Gaulle if you need more information about the town and monuments.

After exploring the episcopal city you can explore Meaux town centre, which has an imposing classical style Town Hall in the classical style at its centre, as well as a Caisse d'Epargne and Palace of Justice from the same period. The streets around the cathedral also contain a good number of imposing townhouses as well as a large market hall.

A second museum in the town is dedicated to Brie de Meaux cheese which is quite small but of interest if you want to learn more about the history and production of this famous cheese.

One of the best views of the episcopal city and cathedral is from the other side of the Marne river, from where the historical buildings are reflected in the river. 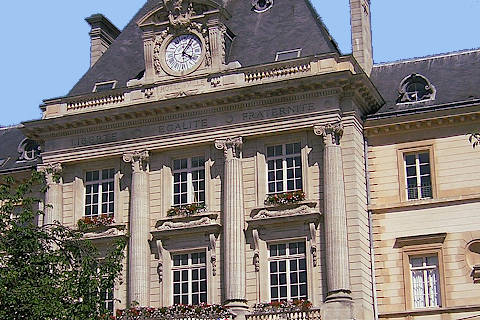 There is a park on the banks of the Marne river in Meaux, just south-east of the town centre, called the Parc Naturel du Patis.

This is a very large park, with numrous small lakes as well as the river encouraging a wide range of wildlife. With a river beach and lots of walking opportunities, this park is very busy on a hot day in summer and an excellent place to enjoy your picnic (brie de Meaux obligatory!) and siesta.

On the north-east edge of Meaux you can visit the Museum of the First World War (Musee de la Grande Guerre).

The museum does an excellent job of explaining the war, life for the soldiers, the weapons and vehicles used, the uniforms, trench warfare and other aspects of this terrible war which affected the town greatly: there were two "Battles of the Marne" that took place near here, in 1914 and again in 1918. Allow a whole morning or afternoon for a visit because there is a lot to see and it is very interesting.

Map of Meaux and places nearby

Visit near Meaux with France This Way reviews

Plan your visit to Meaux, Seine-et-Marne

Regular market(s) are held in Meaux each Tuesday & Thursday & Sunday & Saturday all day & Friday. (Markets are held in the morning unless stated.)

The French version of this page is at Meaux (Francais)