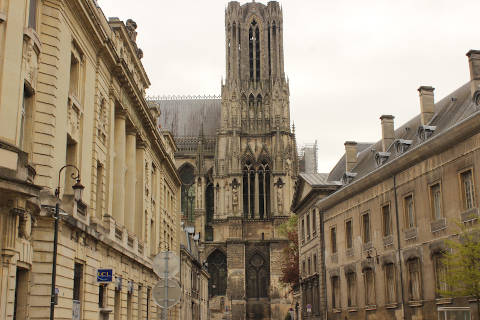 Reims is a city in the Champagne-Ardenne region, in the north of France. Although Reims suffered very badly during bombing in WWI, extensive renovation work has been carried out and its historical centre contains a great deal of interesting monuments including three UNESCO World Heritage Sites.

Your visit to Reims will focus in the historic centre and around the cathedral and other major monuments, and the main squares: the Place Royale, with a statue of Louis XV, and the Place Cardinal-Luçon, with an equestrian statue of Joan of Arc. The Rue de Vesle is the main street and crosses the town from southwest to northwest, passing through the Place Royale en route. 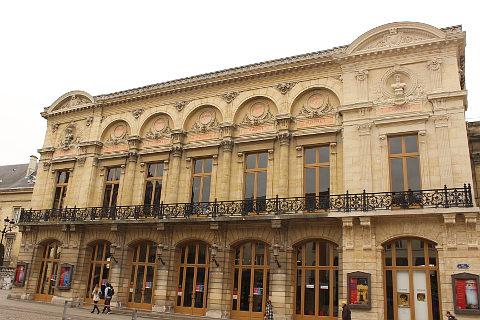 The Place Drouet d'Erlon in the city centre is packed with lively restaurants and bars, and several attractive statues and fountains. During the summer it is filled with people sitting outside the many cafés enjoying the summer sun, and in December it has a lively and charming Christmas market.

As well as the general enjoyment of exploring the town centre, the main highlights in Reims are the Notre-Dame de Reims Cathedral, the Former Abbey of Saint-Remi (now made up of the Basilica and its museum) and the Palace of Tau. All three were added to the list of UNESCO World Heritage Sites in 1991, and the cathedral and the palace are also inscribed as National Monuments in France.

Reims is most famous for its cathedral (1211-1480), which is one of the finest examples of the 'French Gothic' architecture style. Reims was evangelized around the third century AD and a Christian basilica was first constructed here around the year 400, consecrated to the Virgin by the Bishop Nicasius. It was in this church that St. Nicasius was martyred, when the city was taken by the Vandals.

On this site, but with a smaller size than the current cathedral, a Carolingian cathedral was built by Bishop Ebbon around 820 AD, which was enlarged and embellished over the centuries but which burned in a fire in 1210. It was at that time that the inhabitants of Reims decided to build a magnificent monument worthy of the Christian tradition of the city.

Spending huge sums of money on its construction, work on the cathedral began in 1241 and continued from 1299 and throughout the 14th century. Reims cathedral was an important centre for medieval France, and many Kings were crowned here.

The church, in the form of a Latin cross is very large - on the outside the building is 149 meters long and has innumerable decorative highlights to admire.

The key feature of the cathedral of Reims is the sculptures and unique glass windows; for example the western portal has 35 statues and an impressive rose window. Among the most notable scultures are the small figures of angels including the famous 'Smiling Angel', one of the most famous sculptures of the cathedral and on the northern doorway.

The central (western) façade consists of three central doors and two strong buttresses, which are the essential decorative motif of the cathedral. The western portal, with three doors, is also beautiful and rich in statues including the 'Stories of Adam and Eve'. The sides of the cathedral are another highlight, and very elegant with buttresses soaring upward repeating the theme of the main façade.

You will notice inside that some of the stained glass windows are original while others were added more recently to replace those damaged during the war: some of these were designed by notable contemporary artists such as Marc Chagall. 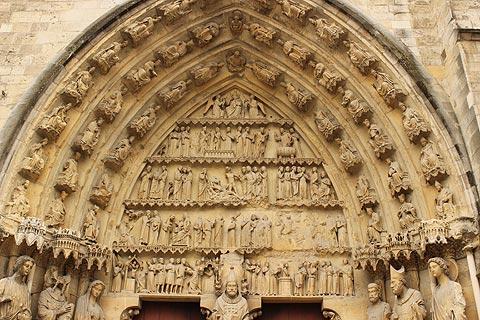 Among other religious buildings to visit are the Basilica of Saint Remi, where the bishop baptized Clovis. The basilica has a Romanesque basilica structure, and particularly noteworthy are the 12th century choir section and the great chandelier of the twelfth century, formed of nearly 100 candles.

Next to the basilica is the 'Musée Saint-Remi', with an interesting collection of archaeological Gaul-Roman finds and a splendid collection of tapestries.

Next to the cathedral in Reims you can see the 'Palais du Tau', one time residence of the kings of France before their coronations and now the Cathedral Museum.

The museum contains the treasury of the cathedral as well as numerous religious works of art: statues, tapestries and other liturgical materials. 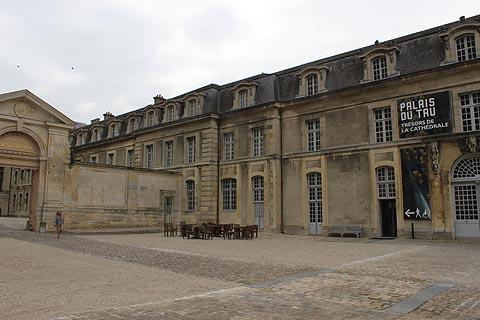 Other highlights in Reims

The oldest monument in Reims is the Porte de Mars ("Mars Gate", so called from a temple to Mars that once stood here). This is a triumphal arch 30 metres long by 13 metres high consisting of three archways flanked by columns.

It is popularly supposed to have been erected by the Remi in honour of Augustus but probably actually dates from the 3rd or 4th century. The Mars Gate was one of 4 Roman gates to the city walls, which were restored at the time of the Norman Invasion of northern France in the 9th century.

Here we have only mentioned the most important sights in Reims. There are also several other important buildings of interest, numerous parks and gardens, other religious monuments including a synagogue and various churches, some grand townhouses, an imposing town hall and part of the original Roman forum.

The city’s economy is based largely on wine production, for which the Champagne region is famous, and a visit to Reims often includes a popular tasting of the most famous French wines at the 'Maison de Champagne'. Of course Reims also has all the shops and other facilities that you would expect in a major city.

Not to be missed during your visit to Reims is the Musée de Beaux Arts on Rue Chanzy, which contains one of the most remarkable collections of paintings in France. 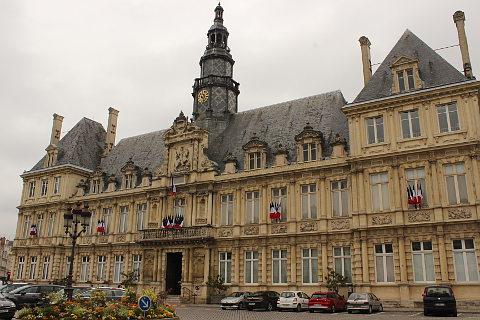 You will be in the Champagne region when you visit Reims, so you will certainly also want to visit Epernay while you are here: it is the centre of champagne drinking and the perfect place to learn about and taste the world's most celebrated drink. Epernay is south of Reims, on the other side of the Regional Natural Park of the Montagne de Reims.

Map of Reims and places nearby

Visit near Reims with France This Way reviews

Plan your visit to Reims, Marne

Regular market(s) are held in Reims each Every day. (Markets are held in the morning unless stated.)

The French version of this page is at Reims (Francais)