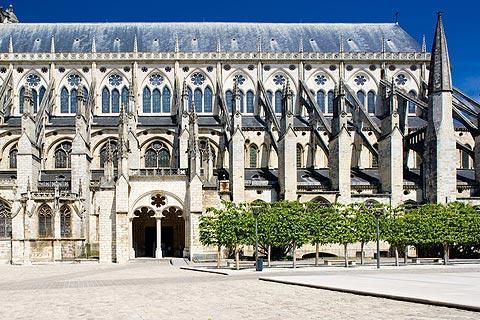 South of Paris and between Burgundy and the Loire Valley, the Cher department is best known for having one of the most famous cathedrals in France at Bourges - although wine lovers might prefer to head for the vineyards of Sancerre to sample the local wines...

The Cher department of France is located to the south-east of the Centre region of France. Together with the Indre department it formed the historical Berry region of France - and you will often come across the name Berry used in tourist literature when visiting the region.

It is true that Cher doesn't have the important castles that you will find elsewhere in the Centre region (along the Loire Valley), but it compensates for that by having the best known cathedral in the region at Bourges, and several other important and interesting historic monuments.

The town of Bourges itself is in the centre of the department and interesting to visit - it has been awarded the 4* Ville Fleurie Award (the highest rating) as well as having the two National Monuments of Bourges Cathedral and the Jacques-Coeur Palace.

A short distance to the north-west of Bourges you can visit Mehun-sur-Yevre and the remains of a castle.

One of the most popular ways to explore the Berry region is to follow the Route Jacques-Coeur, which traces a route passing through many of the highlights.

The main part of the route crosses the Cher department from north to south (the remaining part is in the Loiret department) and includes Culan, Ainay-le-Vieil, Bourges and numerous smaller towns, villages, castles and historic monuments.

One of the most popular destinations in the south-east of the Cher is the village of Apremont-sur-Allier, classified among the most beautiful villages of France and well known for its gardens.

Nearby Sagonne is in an enviable position, with a medieval castle tower overlooking the river, and a little further west the village at Dun-sur-Auron also has some historical fortifications and buildings to see.

Heading further south some of the other highlights to be found include the pretty 'medieval recreation' gardens at the Priory of Notre-Dame d'Orsan at Maisonnais (near Chatelet) and the elegant 12th century cistercian abbey at Noirlac (near Saint-Amand-Montrond).

If you enjoy visiting castles there are also several of interest in this region, such as the castle at Culan, Meillant castle, and Ainay-le-Vieil and its castle

The best known destination to the north-east of the department is the village and surrounding wine region of Sancerre on a raised ridge overlooking the Loire. Close by you will also enjoy a stroll around the villages at Champtin and Ménétréol-sur-Sancerre.

Another highlight is the medieval centre of Aubigny-sur-Nere and the nearby attractive castle and setting of the Chateau de la Verrerie. A short distance north from here the village at Brinon-sur-Sauldre is based around a very interesting church.

Further west in Cher, in the area around Vierzon, we particularly enjoyed seeing the picturesque centre of Brinay and the small village at Massay.

Map of Cher and places nearby