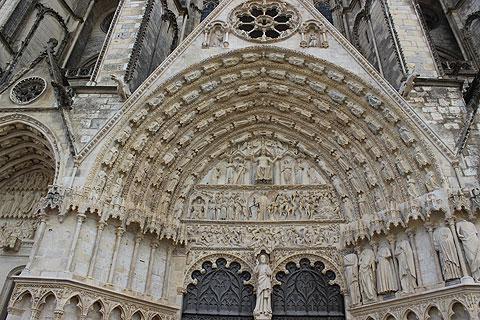 The Cathedral of Saint-Etienne in Bourges is one of the most important and impressive gothic cathedrals in France, an importance recognised by its inclusion as a listed National Monument in France.

France This Way comment: this is one of the most interesting cathedrals in France. The only problem? Several houses have been built in front of the cathedral that make it difficult to see the whole facade from the front. Hence the photos you see are usually taken in the gardens from the side of the cathedral...

As the end of the 12th century approached and the city of Bourges grew in importance, it was decided to build a cathedral that would be as grand as any in France, to replace the older, more modest roman style cathedral that previously stood here.

Work began at the rear of the church with the crypt and choir and progressed towards the front and by 1230 the nave and main facade were completed. This was the time that the cathar movement was growing in southern France, and the cathedral in Bourges deliberately incorporated symbols and icons that were opposed to this cathar movement.

One unusual architectural characteristic of Bourges cathedral is that there is no transept: there are five naves inside the cathedral including the two on each side of the main nave, hence the five entrances on the facade, but the cathedral does not include the sides that usually represent the horizontal part of the cross shape. 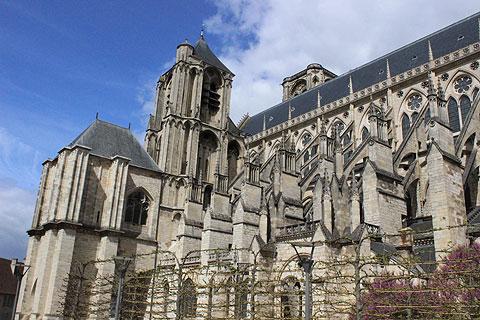 To give some idea of the size of the cathedral, it covers a surface area of 6000 square metres (about the same as 40 family houses) and the nave is 37 metres tall, while the towers reach 58 metres and 66 metres. Particular highlights in the cathedral include:

- the stained glass windows, added during the period from the 13th century to the 16th century, are very rare and colourful and relate many stories from the Bible

- the north tower, with almost 400 steps to climb to reach the impressive views across the rooftops of Bourges from the top. The substantial structure next to the south tower was added in the 13th century when it was thought that the tower was on the verge of collapse.

- the crypt with the 13th century rood screen. Even here in the crypt you can see lovely gothic style stonework, as well as the tombs of the archbishops of Bourges and the Duke of Berry.

- the astronomical clock in Bourges cathedral dates from the 15th century and is the oldest example of this type of clock in France. 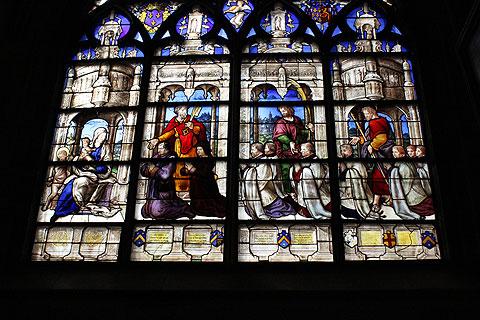 Note: Bourges is very unusual in having two listed National Monuments, an indication of its historic importance. The other is the Palais Jacques-Coeur.

In the town there are also numerous medieval buildings to discover: see the Bourges guide.

Map of Bourges Cathedral and places nearby

Visit near Bourges Cathedral with France This Way reviews

The French version of this page is at Bourges Cathedral (Francais)