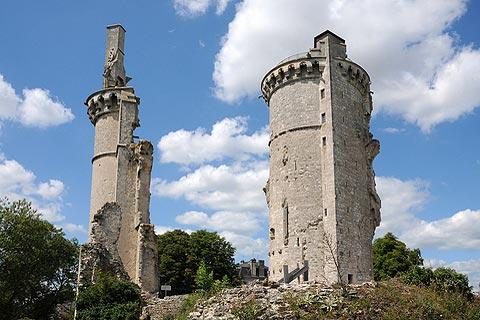 Mehun-sur-Yevre is a town located to the west of the Cher department, a few kilometres north-west of Bourges (towards Vierzon).

The town grew up around the chateau and the court of King Charles in the 15th century. After a period of decline the city refound prosperity in the 19th century, with the development of the porcelain industry. The town is best known and most visited for the remains of its medieval castle.

Dating from the 12th to 14th centuries, the donjon and a second tower are the main remaining parts of the original structure, and the part that is open to visitors. It was here in the Chateau de Mehun-sur-Yèvre that King Charles VII (who with Joan of Arc brought an end to the Hundred Years War) died on the 22 July 1461, and as a result Mehun-sur-Yyevre is known as Charles VII's town.

There is a museum dedicated to Charles VII in the donjon, featuring some interesting artefacts from both the medieval period when the castle and town were at their most important, and also items from earlier periods discovered during archaeological excavations.

The Collegiale Notre-Dame in the heart of the old town of Mehun-sur-Yevre dates from the 11th century, although the belltower was added two hundred years later. Inside the church there are some fascinating medieval wooden sculptures and an unusual art-deco baptism font.

There is also a statue of Joan of Arc in Mehun to commemorate her important role in the town - she was here in October 1429 shortly after the King's coronation. You can also see an imposing 13th century gateway with two tours that once provided access through the town ramparts.

Take the time to also visit the attractive gardens (the Jardins du Duc de Berry) - these quite extensive gardens are a lovely peaceful area with lots of trees and streams.

Another place to visit here in Mehun is the 'Pole de la Porcelain', which features a very impressive selection of vases and other porcelain objects.

The most interesting town near Mehun is at Bourges, about 15 kilometres to the south-east, which has an interesting historic centre as well as two important monuments: the cathedral of Bourges and the Palais Jacques-Coeur. See the Bourges guide for details.

Map of Mehun-sur-Yevre and places nearby

Visit near Mehun-sur-Yevre with France This Way reviews

Plan your visit to Mehun-sur-Yevre, Cher

Regular market(s) are held in Mehun-sur-Yevre each Wednesday. (Markets are held in the morning unless stated.)