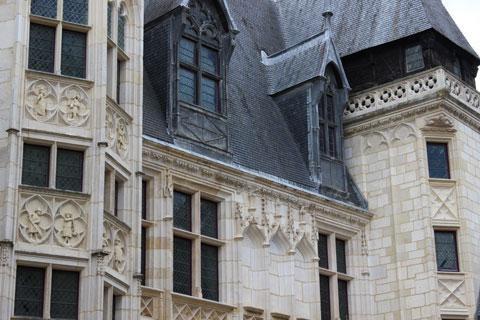 The Palais Jacques-Coeur in Bourges is a fascinating medieval palace and now listed as one of two National Monuments in the town (the other is Bourges cathedral).

France This Way note: we did feel that some of the rooms were rather too basic in presentation, and would benefit from having more period furnishings in them to better represent their original use, but otherwise the palace was very inteesting to visit.

History of the Palais Jacques-Coeur in Bourges

There are many places in France where you can see religious architecture in the Flamboyant Gothic style, but very few places where you can see private buildings incorporating the same style. The Palais Jacques-Coeur is one such example, which partly explains its importance. 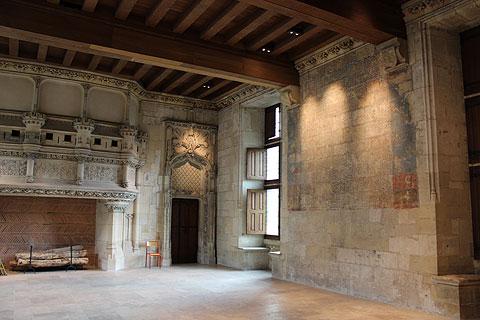 Jacques-Coeur was born in 1400 and rapidly rose in importance to become the treasurer to King Charles VII. He amassed great wealth as a result and built an extensive business empire across southern Europe. This palace, built in the middle of the 15th century between 1443 and 1451, was his living accommodation in Bourges.

The Palace was confiscated from Jacques-Coeur after his arrest by the King in 1451. Jacques-Coeur himself was forced into exile in Greece after escaping from prison, and he died in Greece in 1456 having been unable to use the finished building. The palace was restored to his family in 1457.

Later the building changed hands several times before eventually being sold to the town of Bourges in 1682. It was then used as the Town Hall and later the Palace of Justice - apparently this conversion work, around 1820, involved a substantial part of the interior decoration being lost.

For almost the last 100 years the Palace has been owned and protected by the state, and many programmes of restoration have been caried out over the years.

Visiting the Palais Jacques-Coeur in Bourges

When you enter you are immediately confronted by a large courtyard surrounded by the imposing buildings that comprise the palace. The magnificent stonework of the spiral staircase is just one of the architectural highlights here.

Exploring the rooms in the palace (there is a numbered route to follow that explains the original function of each room) you discover about 20 rooms, beautifully proportioned, that were originally the offices and living accommodation in the palace, as well as attractive galleries and the pieta chapel

The galleries are more decorated than you might expect because they were also used for entertaining: for example the gallery with two fireplaces intricately carved with spectators overlooking some unseen event, and the carpentry work based on the hull of an upturned boat.

Although the building seems very substantial from the outside the individual rooms are mostly of a 'manageable' size and you could almost imagine it being a substantial family home, unlike many of the Chateaux you visit in the Loire Valley!

In particular, look at the stonework as you explore. From the grand staircase to the details carved around the fireplaces and doorways you can see the great attention to detail they used when building the palace. 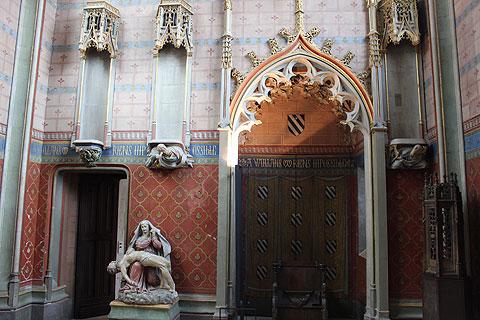 Because of its historic importance there are two classified national monuents in Bourges: the second is the Cathedral of Bourges.

Elsewhere in the town there are numerous impressive buildings to discover: see the travel guide for Bourges.

Map of Bourges Palais Jacques-Coeur and places nearby

Visit near Bourges Palais Jacques-Coeur with France This Way reviews