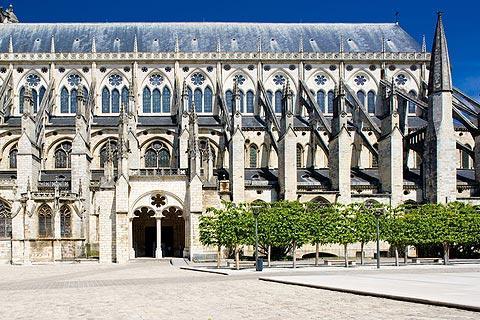 Bourges is an important town in central France, towards the south-east of the Loire Valley (Centre) region and about 100 kilometres south of Orléans. It has a substantial historic centre and two very important monuments - the cathedral and the Palace Jacques Coeur - and the town is very pleasant to explore.

Bourges has been classified as both a protected Historic Town in France and as an official Town of Art and History and both Bourges cathedral and the Palais Jacques-Coeur are listed as French National Monuments.

France This Way comment: the only thing that stops Bourges from being a better known city is its location: it too far east to be visited as part of a short trip to the Loire Valley and too far west to be one of the main attractions in Burgundy, a challenge shared by Orléans to the north of here.

A visit to Bourges will often start at the cathedral, but note that although the cathedral is the main attraction in Bourges there are many other historical monuments and places of interest to discover in the town, so allow time to explore properly.

Note that Bourges Tourist Office is very close to the cathedral, so start by calling in for a plan of the town and a suggested route to follow. Some of the places of interest are rather difficult to find and you might miss them if you explore without a map! 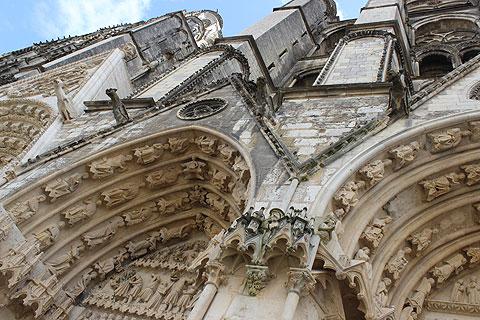 The cathedral of St Etienne of Bourges was constructed between 1195 and 1270. It is now on the list of UNESCO World Heritage sites in France who describe the cathedral as a 'masterpiece of gothic art' - above all for the great success of the design and proportions. This is one of the great cathedrals of France and there are clear similarities in the external design between Bourges cathedral and Notre Dame cathedral of Paris.

The carving around the doorway (called the 'tympanum') is an extraordinary and extensive depiction of the Last Judgement, in fine detail and with numerous individual sections to capture your attention. In all there are five separate entrances along the facade, each featuring elaborate stonework.

Inside Bourges cathedral you can admire the stained glass windows, dating from the 13th century construction of the cathedral (it is very unusual to find original windows in a cathedral of this age). These are very attractive and colourful, and contain fascinating depictions of biblical stories.

Jacques-Coeur was the son of a local merchant born here in 1400 who rose to become treasurer to the King - a position which brought him great wealth with which to build this palace, a magnificent building both inside and outside.

The outside of the palace features a great deal of sculptured ornamentation while inside you can see signs of the luxury, including monumental fireplaces and...indoor toilets (exceptional for the 15th century)! 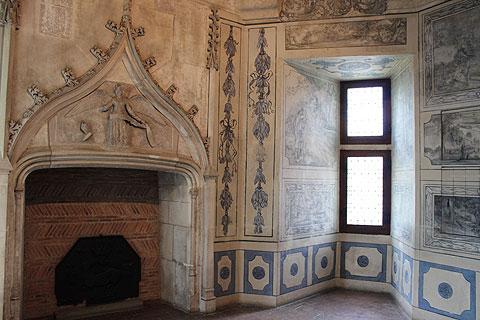 Much ofBourges burned to the ground in 1487, so many of the buildings you see date from the rebuilding shortly after that time, which was a very busy time of reconstruction. Above all it is the medieval part of the old town just north of the cathedral that you will enjoy exploring,.

There are some very impressive grand houses and more modest medieval dwellings, including numerous (more than 400) half-timbered houses, some of which feature ornately carved woodwork. The oldest earlier medieval houses typically feature upper stories that overhang the lower stories, providing some protection from the rain, but this practice was banned in Bourges for buildings constructed after the great fire in 1487.

Start exploring these medieval houses in the Place Gordaine, along the rue Bourbonnoux and the rue d'Auron and elsewhere in the centre. Other particular highlights in the historic centre of Bourges include:

- the 15th century Echevin's palace, immediately recognisable by its hexagonal stone tower (the design was based on the architecture of the Palais Jacqus-Coeur) that contains the staircase. This palace was built to be the new town hall after the fire of 1487 and now holds the Musée Estève, with paintings by the artist Maurice Estève;

- the Hotel Cujas, a 16th century townhouse that is now home to the Museum of Berry;

- the renaissance style Hotel Lallemant, now home to the Museum of Decorative Arts;

- the 16th century Hotel-Dieu, which continued to be a hospital until only 20 years ago;

- the 17th century Archbishops Palace (note that this large building is only a small part of the structure that was originally planned);

Wander a little further and you can see the remains of the Gallo-Roman walls that once formed the city perimeter. Several of the important monuments listed above include one wall that incorporates these original ramparts. A very attractive walk that follows the ramparts is one of the highlights of your visit to Bourges (accessed for example at the southern end of Rue Bourbonnoux).

An unusual sight a short distance south of the cathedral in Bourges is the Chateau d'Eau. When the town first introduced mains water in the 19th century a competition was held to improve the appearance of the new water tower, and the result was this impressive round brick building. Art exhibitions are now held in the building.

There are numerous restaurants and small shops throughout the historic centre, and the Rue Moyenne through the centre of Bourges is where you will find the more well known shops. There are three main weekly markets in Bourges town centre: the Halle au Blé on a Saturday morning; in Place des Marronniers on a Thursday morning and in Place Saint Bonnet each Sunday morning.

There are several parks and gardens in Bourges which are very pleasant to explore and to find some peace and quiet. If you only have time to visit one of these we suggest the Pres Fichaux gardens that have a very unusual design that combines typical French style gardens with statues, hedges and water features.

Another favourite garden area in Bourges is the lovely gardens just outside the old town, where a very extensive selection of small gardens interspersed by streams makes the Marais de Bourges a very pleasant and unusual environment to visit.

Perhaps the best time to visit Bourges is between May and September, at dusk, when careful lighting effects cast an attractive light on many of the highlights in the town and you can follow a two hour walk of the town. Visit Bourges tourist office for information: the walk is self-guided, start the walk in the garden next to the cathedral at dusk and follow the lights! (May, June and September: thursdays, fridays and saturdays; July and August: every evening.)

Map of Bourges and places nearby

Visit near Bourges with France This Way reviews

Plan your visit to Bourges, Cher

Regular market(s) are held in Bourges each Wednesday & Thursday & Sunday & Saturday & Friday. (Markets are held in the morning unless stated.)

The French version of this page is at Bourges (Francais)