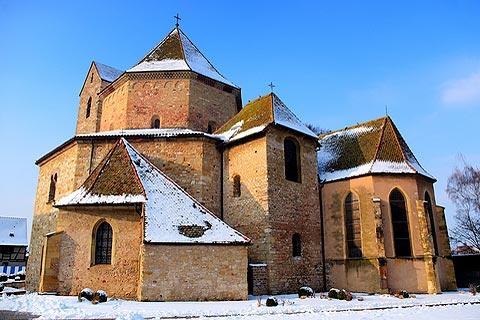 Ottmarsheim is a village at the end of the Rhone and Rhine Canal, 16 kilometres east of Mulhouse and in the Haut-Rhin department of the Alsace region.

The main reason that people visit the town is to visit the impressive abbey-church, but take the time also to have a stroll around the village. Although Ottmarsheim is quite small it is well maintained and there are several medieval half-timbered houses to be seen in the streets close to the church.

Dating originally from the first half of the 11th century, the Church of Saint-Pierre and Saint-Paul originally formed part of a benedictine abbey that was built here by Rodolphe d'Altenbourg, a wealthy local landowner. It is unusual in being octagonal in design*, and a very impressive example of the roman style of church architecture that is almost completely lacking superfluous decoration. 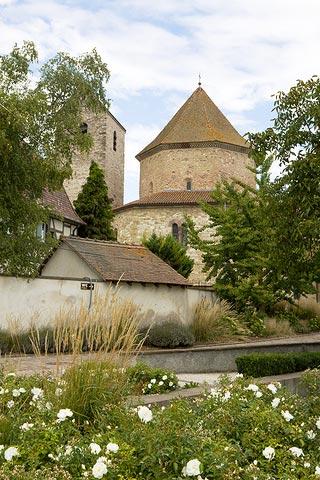 It is also thought to be the oldest church in Alsace (indeed it is also one of the oldest buildings to be found in the whole region). However, two important fires in the middle ages, the Thirty Years War, the French revolution and a fire in 1991 have all caused damage to the church - so the many modifications and renovations carried out across the centuries mean that part of what we now see dates from later centuries.

Inside the abbey church, each side of the octagonal body has a large arched opening.

There are a series of murals in the church at Ottmarsheim, dating from the 14th and 15th centuries. One of the most impressive features the symbols of the four evangelists (an angel for Saint Matthew, a cow for Saint Luke, an eagle for Saint John and a lion for Saint Mark), while another shows Christ on a rainbow betwen heaven and earth.

In the open square in front of the church you can see two traditional half-timbered houses. 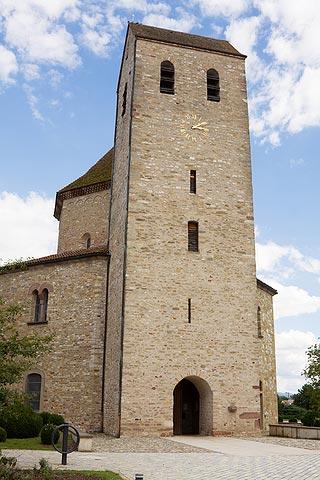 * Note: the octagonal design is usually considered to be a copy of the church of Aix-la-Chapelle (found in Germany),although other sources that suggest the Palatine Chapel in Aachen or the Saint-Vital church in Ravenne, Italy are the inspiration for the design of the abbey church at Ottmarsheim.

One place that will be of particular interest to those interested in the history of the region is the Alsace Ecomuseum at Ungersheim where lots of period houses and buildings have been reassembled to create an authentic medieval Alsace village.

Map of Ottmarsheim and places nearby

Visit near Ottmarsheim with France This Way reviews

Plan your visit to Ottmarsheim, Haut-Rhin

The French version of this page is at Ottmarsheim (Francais)