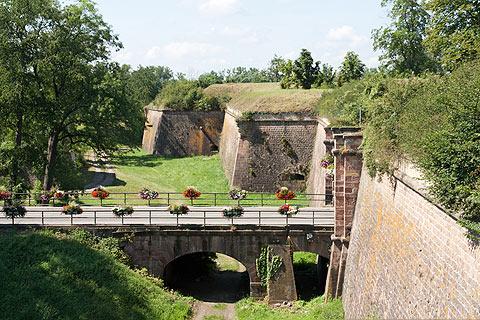 Neuf-Brisach is a fortified town 18 kilometres south-east of Colmar in the Haut-Rhin department of the Alsace region, close to the Rhine River. It is best known as being a masterpiece of military design by Vauban.

The defensive layout of Neuf-Brisach is best understood from aerial photos which clearly show the octagonal layout of the town, with its borders heavily fortified with two further rings of fortifications: the inner ring is octagonal while the outer defences are in the form of an eight-pointed star, and yet more regular fortifications outside the 'star'). 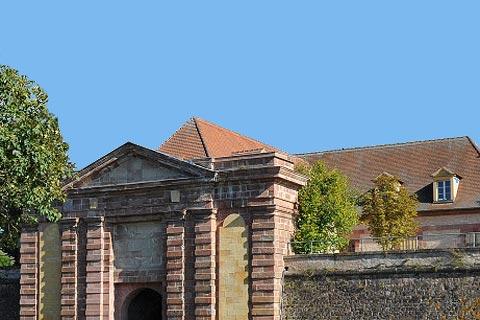 The town was designed by the renowned military engineer Vauban, under the orders of King Louis XIV, in order to defend the border from Hapsburg, and built starting in 1698. There was previously no town at all in the location, which was intended to replace the town of Vieux-Brisach which had recently been lost to the Hapsburgs as part of a peace treaty signed in 1697.

Work on the defences was complete by 1702 and the buildings in the town were constructed over the following 40 years.

It was to be a long time until Neuf-Brisach was to see military action, with the Prussian invasion of 1870 - the French troops here were unable to prevent the Prussians from advancing, and the occupying Germans subsequently linked the town with an important bridge across the Rhine nearby. The town was also damaged during the Second World War (and subsequently repaired).

It is the unusual, carefully planned, design that is of foremost interest in the town - it is unusual to see a town so carefully planned unless we look back to the 13th century bastide towns of south-west France, and is considered to be one of Vauban's greatest achievements.

Consequently Neuf-Brisach is a magnet for historians and engineers as much as tourists. Vauban enthusiasts will also want to visit the small museum in the town (Porte de Belfort, open may to september only).

Note: Neuf-Brisach, with the other important Vauban fortifications in France, is now listed as a UNESCO world heritage site.

The town itself is pleasant to explore, much less 'military' than you might expect and centred around the large Place d'Armes which occupies a large open area in the centre of the town.

Around the square you can see the 18th century town much as it was originally built, with the town hall and the church among the main monuments of interest, and lots of other interesting houses and architectural features in the surrounding streets. 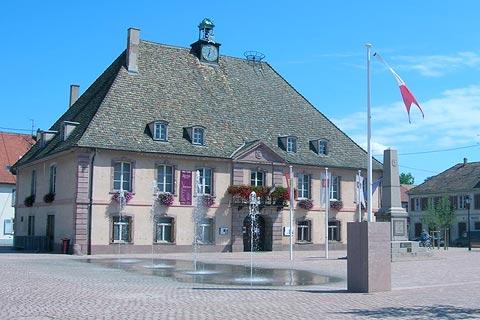 If possible we suggest you visit Neuf-Brisach on a Saturday morning when the market is held in the main square.

The neighbouring town, across the Rhine river in Germany, is called Alt-Breisach (or Vieux-Brisach in French).

Most of the principal attractions in Alsace follow the eastern edge of the Regional Natural Park des Ballons des Vosges, north and south of Colmar and to the west of Neuf-Brisach. See the Alsace Wine Route guide to discover many of the most popular villages and castles in the region.

Map of Neuf-Brisach and places nearby

Visit near Neuf-Brisach with France This Way reviews

Plan your visit to Neuf-Brisach, Haut-Rhin

The French version of this page is at Neuf-Brisach (Francais)