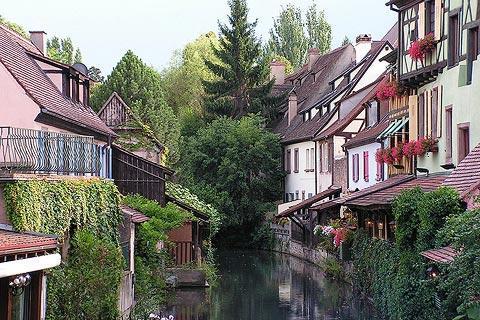 The Haut-Rhin department of Alsace is visited above all for its many picturesque villages and its vineyards, perhaps best discovered by following the route of the Alsace Wine Route, and for the scenery of the Regional Natural Park of the Ballon des Vosges

The more southerly of the two departments in Alsace, the Haut-Rhin is above all a popular destination with those seeking to visit traditional Alsace villages and enjoy the scenery, to see the vineyards and perhaps enjoy the local wine (the northern part of Alsace is the Bas-Rhin department.)

To help with your travel planning this guide introduces the highlights by region, looking first at Colmar and the north of the department and then the region south of Colmar and around Mulhouse.

Colmar and the north of Haut-Rhin

This northern region of the Haut-Rhin in Southern Alsace is particularly attractive, dotted with lots of picturesque villages and towns.

The capital of the department is Colmar which has a very attractive medieval centre with many interesting buildings to see (the 'Little Venice' area is among our favourites) and the Museum of Fine Arts (the Musée Unterlinden). See Colmar for details.

Colmar also makes a good base for exploring the region, with a great deal to do and see nearby.

Three of the villages classified among the 'most beautiful villages of France' are within easy reach, at Eguisheim, Riquewihr and Hunawihr. Equisheim and Riquewihr in particular both have the appearance of villages that have dropped straight out of a fairy story and are very lovely (although rather busy in peak summer season).

To the far north of the department (just beyond Hunawihr) we also enjoyed exploring Ribeauvillé and would suggest you also visit the very pretty fortified village of Bergheim.

Note: although the villages along the 'Route des Vins' attract the most visitors there are many other villages in the region that are also attractive, and often rather less crowded in summer! Visit perhaps Niedermorschwihr, Gueberschwihr, Kientzheim or Saint-Hippolyte - or some of the many others you will see signposted as you explore!

To the west of Colmar the town of Kaysersberg should be a priority for a visit, especially the area along the river in the town, and Turckheim is also very pleasant and has a good number of the traditional painted half-timbered houses of the region.

Heading instead towards the east from Colmar you can visit Neuf Brisach. This is a most unusual town that was built in the 17th century inside three successive series of fortifications to a design by Vauban, the famous French military engineer. As with many of the important works by Vauban the town is now a protected UNESCO world heritage site.

The Regional Natural Park of the Ballon des Vosges

The Regional Natural Park of the Ballon des Vosges occupies a large part of north and west Haut-Rhin, and provides exceptional leisure opportunities. The town of Munster is among the most important in this region.

There are many scenic highlights in the park, with the most memorable including the Route of the Crests on the western border of Haut-Rhin and Le Grand Ballon to the south-west of Murbach (this is the highest peak in the Vosges mountains, and quite an easy walk to reach the summit). Both of these have very impressive views.

Mulhouse and the southern Haut-Rhin

The most popular destinations in the region are found between Mulhouse and Colmar and include the small town of Rouffach, and also Soultz-Haut-Rhin and Guebwiller, which is best known for its churches.

A short distance west of Guebwiller the roman style abbey at Murbach is one of the most impressive religious monuments in Alsace, and also in a very picturesque setting, while an exceptional example of local gothic style architecture can be seen in the doorway of the collegiale church at Thann (west of Mulhouse). (Thann is officially listed as one of the 'plus beau detour' towns in France.)

The Ecomuseum at Ungersheim to the south of Rouffach is one of the most popular attractions in the Haut-Rhin. You can see more than 70 reconstructed period houses and farmbuildings that were brought here from the surrounding region and carefully reconstructed.

To the east of Mulhouse at Ottmarsheim the 11th century abbey-church is also a popular destination for visitors.

The region to the south of Mulhouse is called Sundgau and based around the town of Altkirch. Less visited than the more northern regions it is still pleasant countryside to tour around but is lacking important sights and monuments by comparison.

If you are exploring this region we suggest you include some of the local villages such as Ferrette, with a small historical centre and overlooked by the ruins of a medieval castle; the riverside village of Grentzingen and the pretty centre of Hirtzbach which is also along the riverside

Attractions and towns in bloom in Haut-Rhin

Perhaps inspired by the beautiful houses, many towns in Alsace make a great effort with their flowers and gardens, and several in Haut-Rhin have been rewarded with the 'ville fleurie 4*' (town in bloom) award.

Map of Haut-Rhin and places nearby

A popular way to explore the department - and elsewhere in Alsace - is by following the Alsace wine route.

See an index of all Haut-Rhin communes