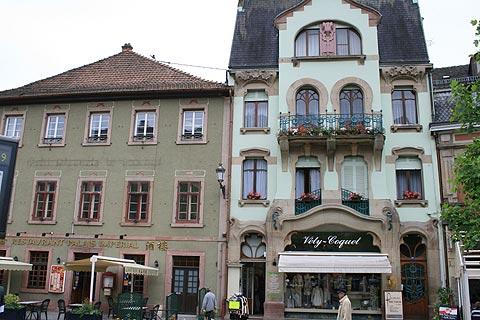 The village of Guebwiller is in the Haut-Rhin department of the Alsace region, to the north-east of Mulhouse and south of Colmar. The town is on the Lauch River, and at the base of the Vosges mountains and the Florival Valley, just eight kilometres from the 'Grand Ballon', the highest point in this mountain range.

Your visit will focus on the churches of Guebwiller, its most important monuments, while along the route you will see pleasant open squares, the small medieval centre, streets lined with houses (some medieval and some 19th century) covered with flowers, the pretty half-timbered houses along the canal, and various small features such as fountains. 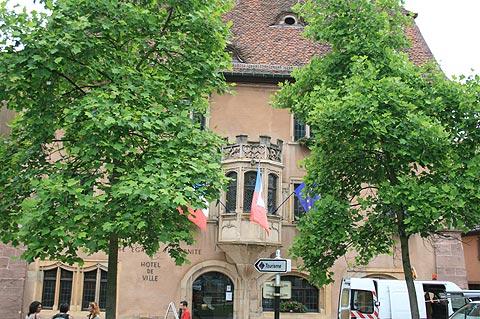 France This Way comment: although Guebwiller lacks the medieval half-timbered houses that give the unique character to many of the Alsace villages in the region, the churches and historic centre are pleasant to explore, especially during the summer when the many flowers and plants add colour to the town centre.

Note that a good number of the houses in Guebwiller, typically those with more ornate facades, were actually only built around 100 years ago although they appear older.

Start your visit in the square outside the romanesque and gothic style Church of Saint-Leger, the most important of the three churches in Guebwiller and dating from the 12th century. The main facade has large square towers either side and a decorative carved entrance with three arcades, while towards the rear of the church a third tower can be seen, this one octagonal and above the apse.

There is an attractive square next to the church of Saint-Leger with a good number of interesting houses. Another monument of interest in this part of Guebwiller is the 16th century town hall, with a decorative round 'balcony' to the front and a statue of the Virgin on the corner.

Another notable church is the gothic style 14th century Dominican church and cloisters (now a musical centre) - note the small decorative belltower to the side of the church, then enter to admire the simple cloisters and the lovely frescoes on the walls of the church.

We love discovering medieval church frescoes wherever we travel in France and these are a lovely discovery in the town. Apparently many of them were covered over with whitewash for several centuries which explains their good condition.

The third church in Guebwiller is the extraordinary-looking 18th century Church of Notre-Dame, the largest neo-classical church in the Alsace which from the outside looks more like a civic building than a church. The facade features multiple columns and statues, typical of neo-classical buildings, while the inside is highly decorated with plaster mouldings and gold painting and is quite a dramatic contrast to the other two churches in the centre. 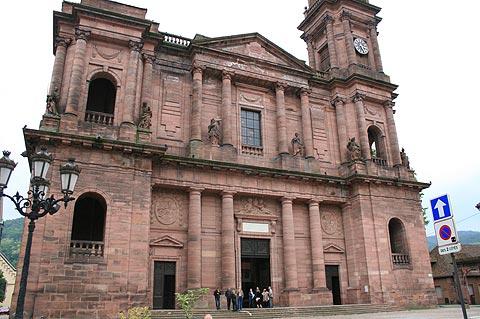 Other attractions in Guebwiller

The Theodore Deck Museum (previously called the Museum Florival) is in a grand house on the place Jeanne d'Arc in Guebwiller and looks at the history of the town and especially the ceramics of Theodore Deck, an important 19th century ceramicist born here. Even if you have never heard of Theodore Deck a visit to the museum is highly recommended if you are interested in ceramics.

Guebwiller has been awarded the 4* 'town in bloom' award (the highest rating awarded). Ask for a copy of the 'circuit vert' from the tourist office for a walk through the parks and gardens of the town.

The area around Guebwiller

Guebwiller is part of the Alsace Wine Route, the popular route that follows through many of the most picturesque wine villages and vineyards of the region and a recommended way to explore.

Map of Guebwiller and places nearby

Visit near Guebwiller with France This Way reviews

Plan your visit to Guebwiller, Haut-Rhin

Regular market(s) are held in Guebwiller each Tuesday & Friday. (Markets are held in the morning unless stated.)

The French version of this page is at Guebwiller (Francais)