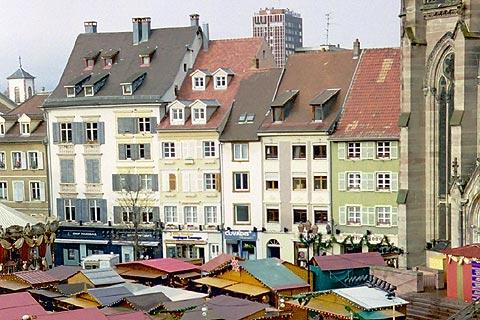 Mulhouse is a large town in the Haut-Rhin department of the Alsace region, very close to the French border with Germany and Switzerland.

The town doesn't play a large part in the Alsace tourist circuit, being better known as an industrial centre, but you will discover an interesting historic centre and some very impressive museums if you take the time to visit.

The centre of the town is quite compact and easily explored on foot. Start your visit in the historic centre of Mulhouse at Place de la Reunion. In and around this attractive square you can see: 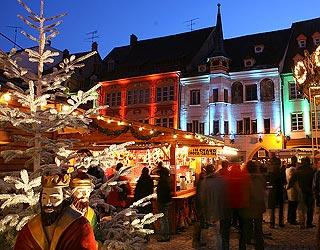 - the protestant Temple of Saint-Etienne, a large neo-gothic style church built in the 19th century - inside the church you can see the stained glass windows from the 12th century church that previously stood in the same location.

- the 16th century Town Hall, landmark site of the town with its decorative facade and now home to the history museum

- the Mieg House, a 15th century townhouse that was for a long time the home to one of the wealthiest families in Mulhouse

- the pharmacy on the Place de la Réunion was built in the 15th century and has been a pharmacy since the middle of the 17th century, which must be some kind of record for a successful business! Go inside to take a look at the painted ceiling.

While little remains of the medieval Mulhouse and the original fortifications have long since disappeared you can still see the four stone gateways that once gave access to the city centre.

It is the highly renowned museums that attract many visitors to Mulhouse (the town claims to be the most important centre for museums in Europe), and the town has several that cover a wide range of interests. The most popular include: 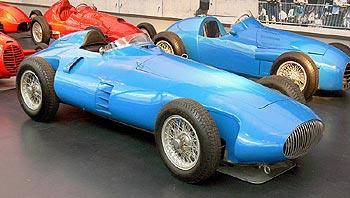 There are also several smaller museums in Mulhouse, including museums dedicated to wallpapers and electrical energy.

As you explore Mulhouse you will see several buildings painted using 'trompe l'oeil', and the town also contains several parks and gardens including the Zoo and Botanical Gardens, the most popular tourist destination in Alsace.

Map of Mulhouse and places nearby

Visit near Mulhouse with France This Way reviews

Mulhouse has received the following tourist classifications: listed town of Art and History ;

Plan your visit to Mulhouse, Haut-Rhin

The French version of this page is at Mulhouse (Francais)