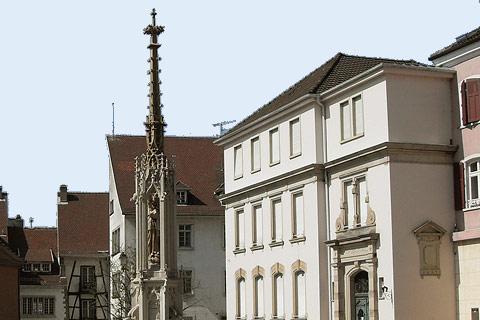 Altkirch is a town to the south of Mulhouse in the Haut-Rhin department of the Alsace region. While it features less highly on the tourist route than many of the pretty villages of Alsace, the town retains several historic monuments and is pleasant to explore when you are in the region.

The town is in an attractive location that developed on a raised hill which was once the site of a castle, destroyed in the 17th century. The remains of the castle were used as landfill before the church was constructed in the same location.

It is the old town in Altkirch around the 19th century Church of Notre-Dame de l'Assomption that holds interest to visitors. Although the castle is no longer to be seen, there are still places in the old town where you can see parts of the defensive ramparts that once completely encircled Altkirch, and you can enter the town through the original 13th century gateway through the defences at 'La Vieille Porte' (originally there were three of these gateways through the walls).

Your visit will focus around the Place de la Republique, where you can see some attractive renaissance period houses, and the substantial sculptured fountain called the 'Fontaine de la Vierge'. The Fontaine de la Vierge includes a medieval statue of the Virgin with an interesting history: during an invasion of Altkirch in medieval times the Virgin appeared in the town and scared away the attackers, so a statue was erected in her honour.

As you explore the streets near the Place de la Republique note especially the house on the Place des Trois Rois called 'à la pomme' which has a decorative medieval corner feature. There are also several decorative fountains and small churches to see as you stroll around the town.

Altkirch is also known for its rooftops, best admired from the road at the top of Roggenberg Hill.

There is a museum in the town - the Musée Sundgauvien - in an impressive renaissance period building next to the town hall. The museum tells the action packed story of Altkirch and the associated history of the Sundgau region (Altkirch is the 'capital' of the Sundgau region, the name given to this part of Alsace between the Jura mountains and Switzerland) and includes small exhibits from the First World War and Second World War.

Just outside the old town in the Saint Morand region of Altkirch you can visit the neo-roman style church priory, rebuilt in the 19th century. The church contains various elements of the earlier church that stood here. In the hospital here you can also visit a small baroque style chapel with an extravagantly painted ceiling.

The town of Mulhouse to the north of Altkirch also contains various historic monuments of interest.

Map of Altkirch and places nearby

Visit near Altkirch with France This Way reviews

Plan your visit to Altkirch, Haut-Rhin

Regular market(s) are held in Altkirch each Thursday. (Markets are held in the morning unless stated.)

The French version of this page is at Altkirch (Francais)